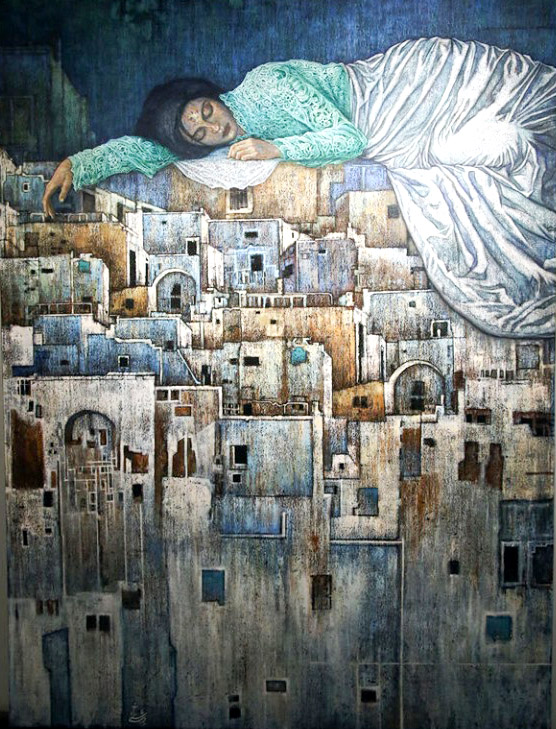 “Pink Moon” is the title of an Iranian artist’s painting exhibition, which is being held these days at the Seihoun Gallery of Tehran.

The exhibition seeks to depict the bitter realities of today’s world, with paintings focused on a range of issues, from poverty and economic hardship to the loneliness of people, in a surreal space.

Mehdi Dashti, the painter of this collection, says the main idea of the “Pink Moon” exhibition was originally inspired by two elements: human and architecture.

“The houses are stair-stepped; houses with dark windows that tell a tale of untidiness. I actually depict a city that is not alive.”

Describing the reason for the city lights being switched off, Dashti says empty houses may indicate people who are isolated. “The human being associated with the architectural element of the community in some works represents the set of influences that society has on him. In fact, in all the works, I tried to explore and illustrate the impact of society and the city on humans.”

The artist described the approach of the “Pink Moon” exhibition as social, saying “the goal I was looking for was more poverty and financial problems. I wanted to show how these problems would affect people and how they would change their lives.”

Asked why he portrayed social realities in a surreal space, he said the rules were not respected at this exhibition. “Surreal space allows for more concepts to be portrayed, and on the other hand, it can communicate with audiences more.”

Dashti also explains why “Pink Moon” was chosen as the title for this exhibition. “In one of the works there is moon and swine; I came across this combination and later found out that the pink moon and swine is an astronomical event.”

* Pink Moon happens when the moon is facing the earth and the sun is completely shining. The moon can appear red-orange due to the composition of Earth’s atmosphere and the angle at which it is viewed. Despite its moniker, the Pink Moon is not actually pink. The name “Pink Moon” comes from the bloom of ground phlox, a pink flower common in North America, according to The Old Farmer’s Almanac.