The Iranian researchers have found a Parthian era clay rhyton shaped in the form of wild goat in a graveyard in Semnan province, in eastern Tehran.

Ata Hassanpour, the head of the archeological team based in Mersin Chal Cemetery in Semnan’s Mahdishahr County stated that so far they have succeeded in opening five graves, adding that the discovered clay rhyton belongs to 2,200 years ago.

He also noted that to date, three trenches measuring 10 by 10 and with an area of 300 square meters have been excavated in this cemetery.

This Iranian scientist further added that the graves in the cemetery are hand-made but without the structure of a grave. According to him, only two stones from above and below are placed as a sign of the grave. The burials in this cemetery are of the arched type with east-west direction, stated Hassanpour.

“In these graves, there are a lot of items that are buried with the deceased, mostly magnificent objects. For example, in a tomb belonging to a lady, along with luxurious objects such as bracelets, anklets, bangles, and all kinds of pottery in various shapes, a bronze ring with the shape of a winged lion was discovered which is unique in its kind.” 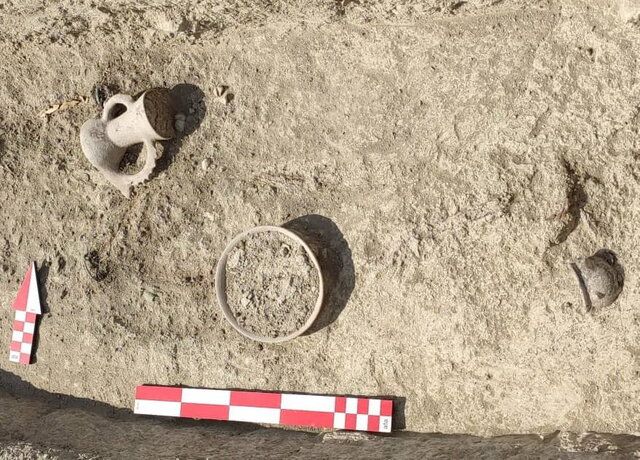 The other things found in this cemetery include beautiful flat plates, bronze and iron ornamental objects and all kinds of decorative beads made of stone, underscored Hassanpour.