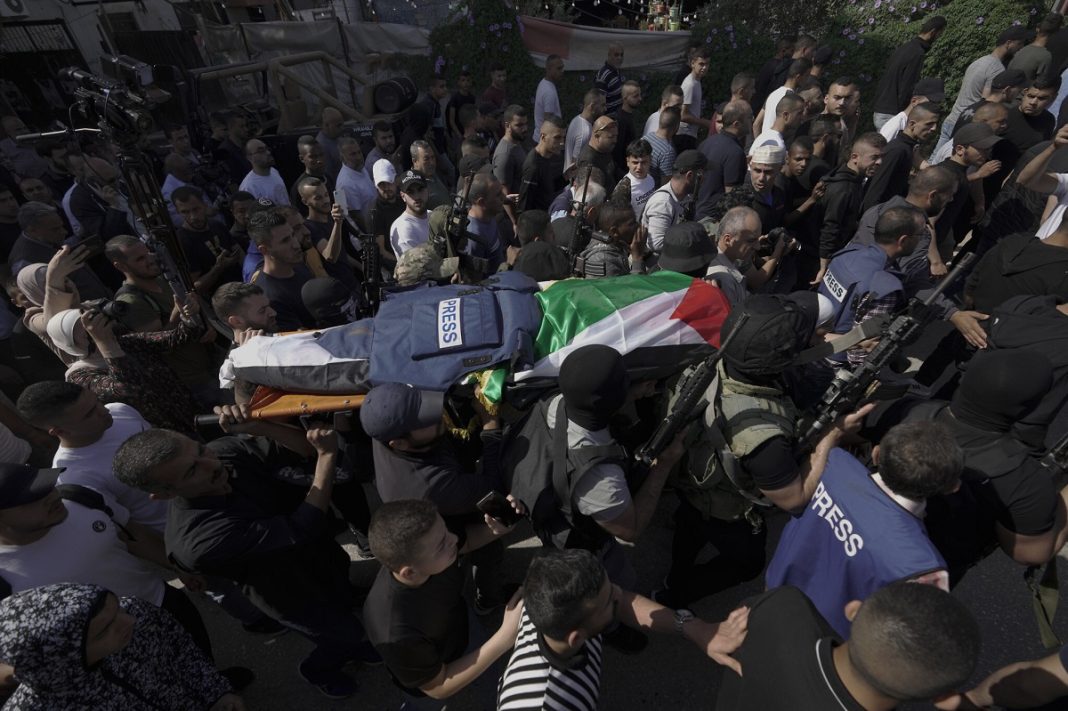 The Palestinian foreign ministry has formally asked the International Criminal Court (ICC) to investigate the killing of Al Jazeera journalist Shireen Abu Akleh by the Israeli forces in the occupied West Bank.

On May 11, Abu Akleh, 51, was covering an Israeli military raid near the Jenin refugee camp in the occupied West Bank when she was shot dead. Eyewitnesses and colleagues who were present at the scene said she was killed by Israeli forces.

“We have documented [the crime] and submitted a file about it to the ICC prosecutor alongside other Israeli violations,” Palestinian Foreign Minister Riyad al-Maliki told Anadolu Agency on Monday.

Al-Maliki called on The Hague-based court to add Abu Akleh’s death to other crimes committed by Israel against Palestinians to facilitate an official investigation and bring Israel to accountability.

Mustafa Barghouti, general secretary of the Palestinian National Initiative, accused the ICC of a “double standard” in its handling of cases submitted by Palestinians.

“We have been providing information for the past 13 years but investigation has not been started yet. And in less than two months the ICC has sent 42 investigators to Ukraine,” Barghouti, a former Palestinian information minister, said.

Barghouti added that there was a need for strong international pressure on the ICC to initiate its work and investigate the crimes, including the crime of killing Shireen Abu Akleh.

“What we also need here is real pressure on Israeli establishment, a serious effort to establish sanctions and punitive acts against Israel, not to allow it to continue to be above international law,” he continued.

Israel’s military prosecutor has called on the army to conduct an in-depth investigation.

The Israeli media reported last week that the military had no plans to launch a criminal investigation into the killing of the Al Jazeera journalist.

On Monday, the Israeli army announced that if an Israeli soldier fired the lethal shot, it did not appear that the soldier was guilty of criminal misconduct.

“Given that Ms Abu Akleh was killed in the midst of an active combat zone, there can be no immediate suspicion of criminal activity absent further evidence,” said a statement citing Military Advocate Yifat Tomer-Yerushalmi on Monday.

Tomer-Yerushalmi will ultimately be responsible for determining whether any individual soldier will face disciplinary action. She stressed that Israel does not yet know whether Abu Akleh, a Palestinian-American, was killed by stray Palestinian gunfire or by an Israeli bullet aimed at a Palestinian fighter.

“The inability to inspect the bullet, which is being held by the Palestinian Authority, continues to cast doubt on the circumstances of Ms Abu Akleh’s death,” the statement added. The army has noted it had zeroed in on one incident where an Israeli soldier using “a telescopic scope” fired at a “Palestinian gunman”.

However, a new video that begins moments before the shooting shows relative calm and quiet with no sounds of fighting, corroborating witness reports that there were no clashes or “active combat zone” between Israeli forces and Palestinian fighters at the time of the Al Jazeera reporter’s killing.

Al-Maliki, the Palestinian foreign minister, accused Israel of “exploiting the lack of accountability” by the international community to commit more violations against Palestinians.

“Israel must be held accountable for its crimes,” he said, going on to slam the “weakness and inaction of the international community” towards the Israeli violations.

“The international community contributed to creating the Palestinian cause, and it must contribute to putting an end to this suffering,” he added.

Al-Maliki cited Israeli plans to build thousands of illegal settlement units in the Palestinian area of Masafer Yatta in the southern occupied West Bank as an example of Israel’s latest violations against Palestinians.

He noted the Palestinians there “are reliving the Nakba as Israel attempts to expel them from their homes”.

The Nakba, or “catastrophe”, refers to the 1948 forced expulsion of nearly 800,000 Palestinians from their homes in historical Palestine to make way for the creation of the state of Israel.