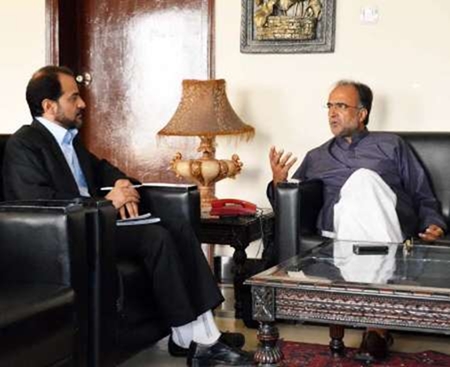 Pakistan’s former information minister and senior opposition leader strongly believes that Iran is a time-tested, stable and reliable neighbour and friend of Pakistan.

In an exclusive interview with IRNA, Central Information Secretary of Pakistan People’s Party (PPP) Qamar Zaman Kaira said, “We do believe that Iranians will never allow any country to use their soil against the interest of Pakistan.”

Giving his views on Iran-Pakistan relations, the politician said there is a strong bond between Iran and Pakistan, which runs much stronger and deeper than relations with any other country in south Asia.

Commenting on the Chabahar agreement between Iran, India and Afghanistan, Qamar Zaman Kaira stated that Pakistan should resolve its issues with India peacefully.

“If we develop both Chabahar and Gwadar, it will create a hub in this area. I think that Chabahar and Gwadar can be sister ports. They can be supportive ports not against each other,” said Kaira, adding that Iran has to develop its own infrastructure and seek its own benefits.
“We are only concerned about the large presence of India in Afghanistan near the Pakistani border, but we are not against cooperation between India, Iran and Afghanistan,” said the PPP leader.

Now that sanctions are being lifted from Iran, he commented that the Pakistani government must pay attention to the Iran-Pakistan gas pipeline (IP) project and take it seriously.

On the current political crisis in Pakistan over the Panama leaks, he rejected the possibility of any military takeover in Pakistan even during this critical period, adding that military has no such plans. “Our military has learnt a lot and I don’t anticipate any kind of takeover situation because of the Panama issue,” he said.

“We are against any military takeover. Pakistan People’s Party always supports a democratic Pakistan, and will block any move which is undemocratic or unconstitutional,” he said.

Qamar Zaman Kaira went on to say that all opposition parties are united on the Panama issue, and if the government does not agree to an investigation of the matter, the opposition parties will sit together and will decide on future strategies, which may include taking to the streets. He denied rumours about any meeting between Prime Minister Nawaz Sharif and PPP’s co-chairman Asif Ali Zardari on the Panama issue.

Looking at Pakistan-US ties, he said, “Relations between Pakistan and the US have a special history. There have been ups and downs, but for the last three decades our relationship has been hijacked by the Afghan situation.”

He said that the US is trying to put pressure on Pakistan for more regressive policies in fighting against terrorism, but it is Pakistan who will decide its strategy. “Pakistan is an independent country and has to follow an independent foreign policy not linked to any particular country,” he said,

The political leader said that the killing of Taliban chief Mullah Akhtar Mansour on Pakistani soil by Americans was an obstacle to the Afghanistan peace process. “After some time, the new leadership of the Taliban has to come to dialogue, but Americans must consider that any unilateral action which hurts the peace process will not serve the interest of any country.”

Commenting on Iran-Saudi tensions and the Hajj issue, Kaira said this it very unfortunate that this year Iranian pilgrims are deprived of Hajj. The political leader noted that all Muslims must be allowed to perform Hajj, and that no one should stop them.

“The Government of Pakistan should try its level best to resolve the issue between Iran and Saudi Arabia – both are our friends.”