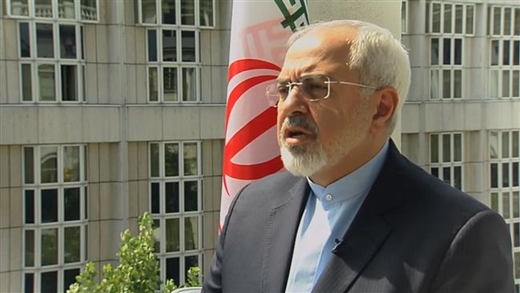 FM Mohammad Javad Zarif says that Iran and P5+1 “have never been closer to a lasting outcome.”

Iranian Foreign Minister Mohammad Javad Zarif says Iran’s negotiating partners have to make a choice between agreement with the Islamic Republic or coercion against it.

In a video message released on Friday, the Iranian foreign minister referred to the negotiations between Iran and P5+1 and said the two sides “have never been closer to a lasting outcome.”

“Getting to yes requires the courage to compromise, the self-confidence to be flexible, the maturity to be reasonable, the wisdom to set aside illusions and the audacity to break old habits,” Zarif said.

A full transcription of his message follows:

“I’m in Vienna to put a long overdue end to an unnecessary crisis. At this eleventh hour, despite some differences that remain, we have never been closer to a lasting outcome. But there is no guarantee.

“Getting to yes requires the courage to compromise, the self-confidence to be flexible, the maturity to be reasonable, the wisdom to set aside illusions and the audacity to break old habits.

“I see hope because I see emergence of reason over illusion. I sense that my negotiating partners have recognized that coercion and pressure never lead to lasting solutions but to more conflict and further hostility. They have seen that eight years of aggression by Saddam Hussein and his patrons did not bring the Iranian nation that stood all alone to its knees.

“And now they realize that the most indiscriminate and unjust economic sanctions against my country have achieved absolutely none of their declared objectives but instead have harmed innocents and antagonized a peaceful and forgiving nation.

“They have opted for the negotiating table. But they still need to make a critical and historic choice: agreement or coercion.

“In politics, as in life, you can’t gain at the expense of others. Such gains are always short-lived. Only balanced agreements can withstand the test of time.

“We are ready to strike a balanced and good deal and open new horizons to address important common challenges. Our common threat today is the growing menace of violent extremism and outright barbarism.

“Iran was the first to rise to the challenge and propose to make confronting this threat a global priority when it launched WAVE (World Against Violence and Extremism). The menace we’re facing – and I say we because no one is spared – is embodied by the hooded men who are ravaging the cradle of civilization. To deal with this new challenge, new approaches are badly needed.

“Iran has long been at the forefront in the fight against extremism. I hope my counterparts will also turn their focus and devote their resources to this existential battle.

“A thousand years ago, the Iranian poet Ferdowsi said: ‘Be relentless in striving for the cause of good, bring the spring you must, banish the winter you should.’

“My name is Javad Zarif and this has always been Iran’s message.”