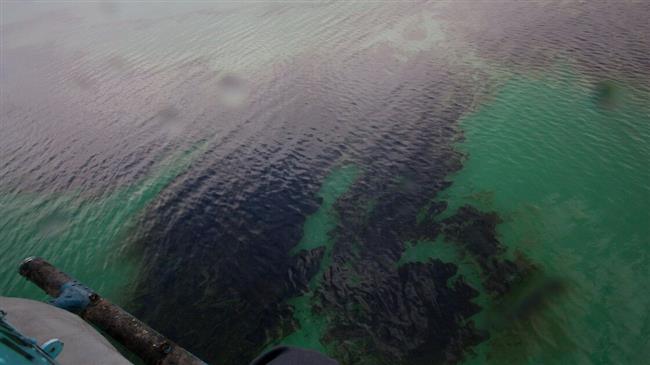 Iranian authorities say a major leak that has taken place off an oil rig in the Persian Gulf waters is being contained as they insist more work would be needed to stanch the expanding spill.

Head of the local branch of Iran’s Ports and Maritime Organization (PMO) in the southwestern province of Blushehr said on Tuesday that the leak had been spotted from an oil transfer pipeline connected to the Abuzar Oil Platform located around 13 kilometers off Kharg, the island from which Iran sells much of its crude.

Siavosh Arjmandzadeh said the leak covered an area of around 24 kilometers to 100 meters, adding that it might expand if not contained soon.

“… The clean-up operation has started but because of the intensity and the possibility for expansion of contamination there is need for more equipment and reinforcement,” said Arjmandzadeh.

The official said four vessels had already been dispatched to the area to spray dispersants on the leak, adding that neither the PMO nor the Iranian Offshore Oil Company (IOOC), which owns the oil rig, would be able to fully contain the leak on their own.

He said efforts were being coordinated at regional and national levels to accelerate the clean-up operation.

There was no immediate comment from Iran’s Oil Ministry, which operates the oil installations off Kharg.