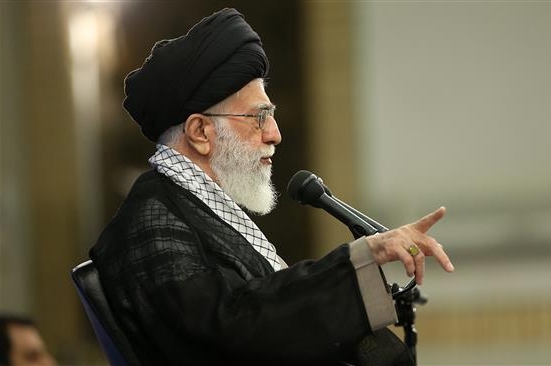 Leader of the Islamic Revolution Ayatollah Seyyed Ali Khamenei has strongly criticized the revocation of the citizenship of a senior cleric in Bahrain, saying Bahraini youths cannot be silenced anymore.

“In Bahrain, a ruthless and arrogant minority is oppressing the majority; and has now carried out an act of aggression against the diligent scholar, Sheikh Isa Qassim. This is insanity and stupidity,” the Leader said on Saturday.

Ayatollah Khamenei elaborated that it was Sheikh Qassim who prevented the mass protests in Bahrain from being driven to extremism.

“These fools do not understand that eliminating Sheikh Isa Qassim means removing the barrier in front of the spirited Bahrani youths against the government. Nothing can silence these youths anymore,” the Leader said.

Bahrain on Monday revoked the citizenship of Sheikh Qassim, accusing him of sowing “sectarianism and violence.”

Bahrain’s Interior Ministry claimed in a statement that Sheikh Qassim actively sought the “creation of a sectarian environment” through his connections with foreign powers.

The ministry claimed that the cleric had misused his religious position to advance a political agenda and serve foreign interests.

The Bahrain Center for Human Rrights said in a statement that the decision against the top Shia cleric “is yet another blow to freedom of speech and expression in Bahrain” and is “part of an escalating crackdown on freedoms and rights.”

It urged the government to “immediately and unconditionally reinstate the citizenship of Qassim and all those affected,” saying that it had documented evidence of at least 261 cases since 2012.

Elsewhere in his speech, Ayatollah Khamenei pointed to the enemy plots against Iran, saying, ” They created Daesh [Takfiri terrorists] to defeat the Islamic Republic. Iraq and the Levant were a prelude to crippling Iran.”

However, the Leader stressed, “It was the might of the Islamic Republic that brought them to their knees.”

Iran has recently arrested a number of Takfiri elements seeking to carry out terror attacks in the country.

Iran’s Intelligence Minister Mahmoud Alavi said on June 21 that as many as 10 terrorists were apprehended from June 14 to 20 in Tehran and three border and central provinces.

According to the minister, the militants were planning remote control explosions, suicide bombings, and car bombings against bustling areas.

Wahhabism is the radical ideology dominating Saudi Arabia. It forms the dogma of the Daesh Takfiri terrorist group, which is wreaking havoc mainly in Iraq and Syria.

Ayatollah Khamenei made the remarks in a meeting with the families of Iranian military advisers killed in Syria while on a mission against the Takfiri terrorists wreaking havoc in the Arab country.

Iran maintains military advisers in Syria, where the government of Syrian President Bashar al-Assad is fighting an array of foreign-backed militant forces, including, but not limited to, those of the Daesh terrorist group.

Syria has been gripped by a foreign-backed militancy since March 2011. According to United Nations Special Envoy for Syria Staffan de Mistura, over 400,000 people have been killed in the conflict.

Also meeting with the Leader on Saturday were the families of the victims of a bomb attack in Iran in early 1980s.

On 28 June, 1981, a powerful bomb went off at the headquarters of the Islamic Republic Party (IRP) headquarters, where the party’s leaders were holding a meeting. Tens of Iranian officials, including then Head of Supreme Judicial Council Ayatollah Mohammad Beheshti, were killed in the bombing by the terrorist Mujahedin-e Khalq Organization (MKO).

The MKO has carried out numerous terrorist attacks against Iranian civilians and government officials over the past three decades. Out of the nearly 17,000 Iranians killed in terrorist attacks since the victory of Iran’s 1979 Islamic Revolution, about 12,000 have fallen victim to MKO’s acts of terror.