No time should be wasted in Iran talks: China 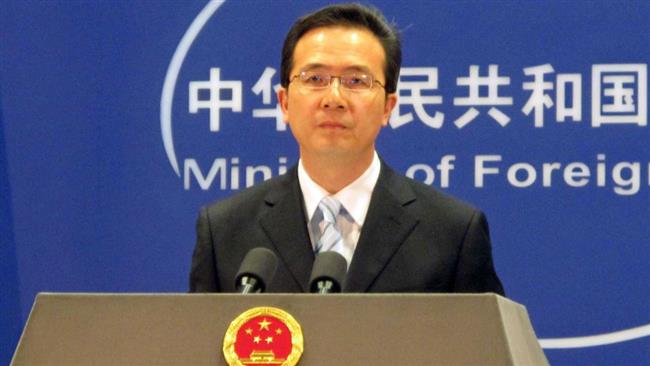 China says it pursues an “objective and unbiased” approach to the Iranian nuclear issue and plays a constructive role in advancing the negotiations.

China has urged all sides involved in the negotiations over Tehran’s nuclear program not to lose any time in the bid for a comprehensive agreement.

Speaking at a regular press conference on Monday, Chinese Foreign Ministry Spokesperson Hong Lei urged all sides in the negotiations about Iran’s nuclear program to build up political will in an attempt to reach a comprehensive agreement.

“The negotiation on a comprehensive agreement on the Iranian nuclear issue has come to a critical point… All parties concerned should build up political will, work towards the shared goal, waste no time in making political decisions and make joint efforts to clinch a final deal through negotiation,” Hong said.

He added that during the latest nuclear talks between Iran, P5+1 and the EU in Lausanne, Switzerland, all participants demonstrated “strong political will, pragmatic attitude for negotiation and innovative thinking.”

The Chinese official pointed out that important progress has been made in Lausanne while the gaps still remain.

He said Beijing pursues an “objective and unbiased” approach to the Iranian nuclear issue and plays a constructive role in advancing the negotiations.

“The Chinese side put forward a host of ‘China solution’ and ‘China thinking’ on relevant focal and thorny problems during the negotiations to bridge differences among all parties and contribute ‘China wisdom’ to the negotiations. We will continue to make relentless efforts together with other parties,” Hong said.

Meanwhile, foreign ministers of Iran and Russia have exchanged views on the latest developments pertaining to Tehran’s nuclear program and vital issues relating to bilateral cooperation.

In a phone conversation on Monday, Iran’s Foreign Minister Mohammad Javad Zarif and his Russian counterpart Sergey Lavrov discussed the settlement of the nuclear issue ahead of a new round of talks between Iran and P5+1.

A fresh round of nuclear talks is scheduled to resume in the Swiss city of Lausanne on Thursday with a planned visit between Zarif and US Secretary of State John Kerry.

The latest round of nuclear negotiations ended in Lausanne on March 20 after six days of intensive and serious talks with both Iran and the United States citing progress.

The Iranian foreign minister said on Friday that “good progress” had been made over the six days of the latest round of negotiations and pointed out that some work still needed to be done.

The US secretary of state also said, “We’ve made a lot of progress.”