No Talks to Be Held with US at Any Level: Iran Leader 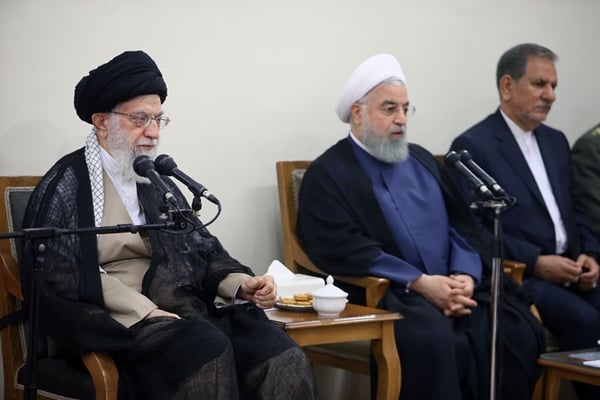 Leader of Iran’s Islamic Revolution Ayatollah Seyyed Ali Khamenei says no negotiation will be held with the US at any level as the Trump administration wants to tell the world it has forced the Islamic Republic to sit for talks.

Ayatollah Khamenei on Wednesday said the current officials in the US are blatantly showing enmity towards Iran unlike their predecessors who at least tried to pretend otherwise.

“So there will be no negotiation at any levels with the Americans,” said the Leader, addressing cabinet members on the occasion of Government Week.

Ayatollah Khamenei noted that all previous US administration were after holding talks with the Islamic Republic, adding, “They want to say that we even managed to bring Iran to the negotiating table; so, as I have already stated in detail, there will be no talks with them.”

The Leader underlined that there is no problem with the continuation of negotiations with Europe, but the negotiators must not hold out so much hope [on Europe] on issues such as the JCPOA and economy.

He also criticised Europe’s inappropriate behaviour on issues like sanctions and the nuclear deal stressing that Iran must look at the process with uncertainty and great care.

Ayatollah Khamenei said the JCPOA is a means to preserve national interests noting that the 2015 agreement is not a goal, but a means.

“Therefore, if we come to the conclusion that it is not possible to maintain national interests by this means, we will abandon it,” he added.

“Europeans should understand from the remarks and actions of the Iranian officials that their measures will lead to appropriate moves by the Islamic Republic of Iran,” he underlined.