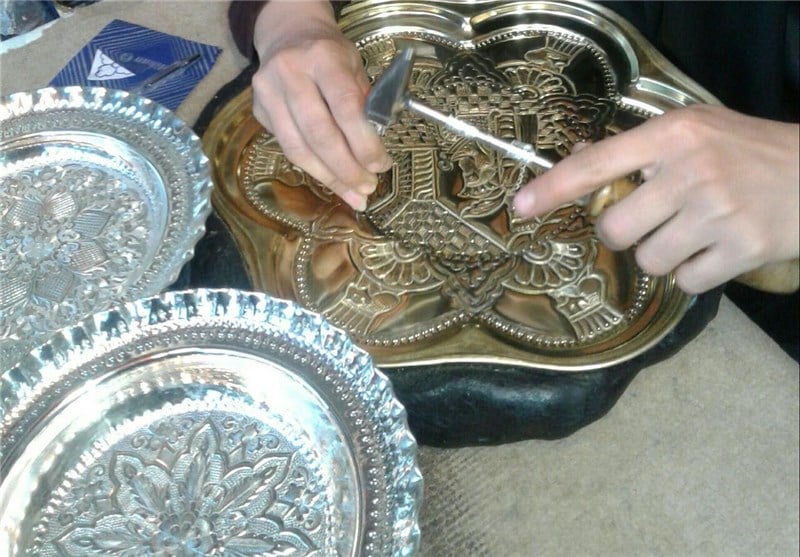 The art of making beautiful crafts using nickel silver is among the oldest traditions in Lorestan province in western Iran.

Nickel Silver is a white-silver alloy. It consists of 20 percent nickel and 35 percent zinc and 45 percent copper, and melts and takes shape easily. The material has been imported into Iran from German and Poland. Given its brightness and resistance against decay, the alloy is also known as German silver.

The craft’s history in Iran

Since long times ago, the artists of Lorestan, the city of Borujerd in particular, earned their livelihood through making various types of handicraft; to name rug, jajim, carpet- and the valuable art piece deeply rooted in the province’s history: nickel silver crafts.

The craft used to be among most profitable careers in Borujerd. It made up a large part of old business in the region, to the point that Borujerd’s name is associated with nickel silver crafts.

There are various accounts on the history of this type of craft in Iran. One historical account says that a small number of Iranian blacksmiths from Isfahan, Borujerd, Dezful and a number of other cities were dispatched to Russia to learn this art.

Meanwhile, according to some historical books, Iranians used to make the crafts under the Seljuk and Safavid dynasties. The art reached its climax during the Qajar dynasty.

In some historical documents, a number of Borujerd artists are portrayed while working on nickel silver sheets. They used the sheets to make the basic items for an ordinary life; and came to be known as inkwell makers because they were the first artists who made inkwell from those sheets.

The art in today Borujerd

The artists of Borujerd create beautiful pieces of art by hammering and bending the nickel silver sheets. They use simple devices beside their own physical power to make utensils like dining dishes, samovar, sugar dish, caddy, and rosewater sprinkler.

Nickel silver craft was registered as an intangible cultural heritage earlier this month.