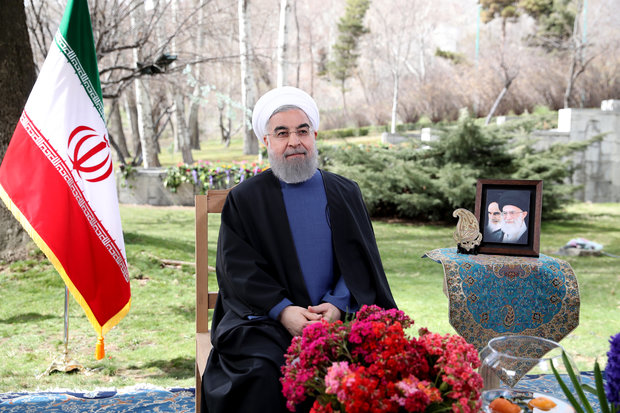 Iran’s President Hassan Rouhani says the new Iranian year is a time to create new jobs for the country’s youths, adding that what the country achieved in the past year in terms of curbing inflation and creating jobs has been unprecedented in the past 25 years.

“We need to carry out more efforts to compensate for the shortcomings,” he added.

“What we achieved in the last year in terms of curbing inflation, economic growth and job creation, has had no precedent in the past 25 years,” the Iranian president said.

During the preceding year, the country achieved an economic growth rate of eight percent for the first time after 11 years, he noted.

Rouhani also commended efforts by the country’s oil and gas industry in doubling the production of crude oil and condensate last year.

“Through oil diplomacy and because of efforts made by engineers and workers we managed to reclaim our past position in the production of oil and gas and condensate,” the Iranian chief executive said.

The Iranian president warned that “everybody must know that if they violate the citizenship rights, they will pay a very high price.”

He noted that Iranians must take part in two important elections this year, noting that ensuring people’s maximum turnout in those elections as well as holding “healthy competitions and constitutional elections” must be everybody’s goal.

Earlier on Monday, in his televised message to the nation on the occasion of the Persian New Year, Leader of the Islamic Revolution Ayatollah Seyyed Ali Khamenei stressed the importance of domestic production and employment, especially for the Iranian youths.

“These are the main and key sectors. If we manage to focus on these two sectors and plan and categorize our affairs on this basis, I believe that the task will move forward to a great extent and impressive and tangible achievements will be made,” the Leader said.

The Leader designated the new Iranian calendar year of 1396 as the “Year of Economy of Resistance: Production and Employment.”

Iranian Foreign Minister Mohammad Javad Zarif also expressed his congratulations to all Iranians across the globe on the advent of Nowruz.

“Spring is the harbinger of renewal and hope for all,” Zarif said on his official Twitter account.

He expressed hope that the New Year would “bring all peace and joy.”