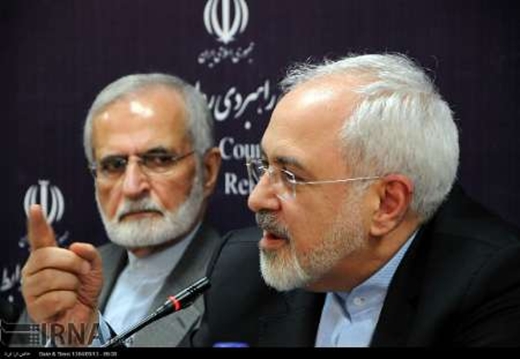 Our missile experts tell us that none of our missiles are designed for carrying nuclear warheads, and they will never be designed for that purpose, Zarif said.

Foreign Minister Mohammad Javad Zarif said on Tuesday it is very important that a new atmosphere has emerged after the nuclear agreement, but it is unfortunately misunderstood by some people.

Speaking at a session of Strategic Foreign Relations Council, Zarif elaborated on the legal aspects of the UN Security Council Resolution 2231 and its appendixes, arguing that in order to resolve the issue, President Rouhani’s government was urged to create new conditions.

“The important point is that the old atmosphere (of threats and sanctions) is demolished and a new atmosphere has emerged, but some people misunderstand it. Today a new chapter has opened and that is what Mr. Rouhani refers to as exit from Chapter 7 of the UN Charter,” he said.

The Iranian foreign minister said, this means the Iranian nuclear program is no longer considered a threat to the international peace and stability.

“It is right that our nuclear program must proceed with certain restrictions. That is for sure, since six resolutions of the UN Security Council which were passed in the course of eight years (of the previous Iranian government) against Iran and we had not abided by them, and righteously not done so, are now annulled,” he added.

He said that those restrictions are under Article 41 of the UNSC Resolution. They should exist and there is no escape from them, but for our friends who are experts in legal affairs this should be clarified.

“Our missile experts tell us that none of our missiles are designed for carrying nuclear warheads, and they will never be designed for that purpose,” added Zarif.

The Iranian foreign minister added that he believes a major development has taken place.

“After all, Iran has managed to negotiate with six world powers, get engaged in a give and take transaction, urge them to yield to the passing of a UNSC resolution to guarantee the proper implementation of JCPOC, and all in all turn the threat into an opportunity.

“I believe this is an exceptional opportunity for Iran, although there are threats as well,” he added.