Negotiating with US Not to Solve Iran’s Problems: Leader 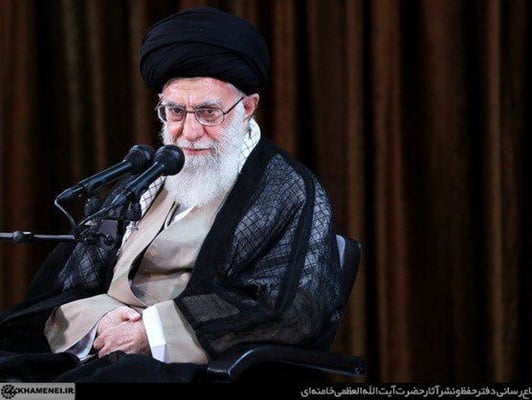 Ayatollah Seyyed Ali Khamenei, the Leader of Iran’s Islamic Revolution, says holding talks with the United States and restoring relations with the country would not solve any of Tehran’s problems.

It is a clear mistake to think that negotiating or having ties with the US would settle the Islamic Republic’s problems, the Leader said in a Saturday meeting with Iranian foreign minister and a group of Iranian ambassadors and diplomats in Tehran.

“The US has basic and fundamental problem with the Islamic Establishment of Iran. Moreover, there are many countries in Africa, Asia, and Latin America which have ties with the US but are still gripped with many problems,” Ayatollah Khamenei added.

The Leader pointed to the deep animosity of the US towards the Islamic Republic, and said, “Americans seek to restore the position they had in Iran before the 1979 Revolution, and would not be satisfied with anything less than that.”

The Leader said Washington’s opposition to Iran’s nuclear power, high enrichment capabilities, and its regional presence has its roots in the US’ deep hostility towards the components of the Islamic Republic’s strength.

Ayatollah Khamenei referred to the country’s regional presence as one of the components of Iran’s power and security, and said this is why the enemies are opposed to such presence.

Iranian officials have repeatedly announced that the US cannot be trusted, he noted, adding that he himself has long been repeating the fact that the Americans’ words and even signatures cannot be trusted. “So holding talks with the US is futile.”

The Leader further highlighted the significance of taking advantage of the country’s untapped or less-tapped opportunities.

“Negotiations with Europeans shouldn’t be stopped, but we shouldn’t stall the country while waiting for Europeans’ package [to save the Iran nuclear deal]; rather many required measures must be taken inside the country,” he added.

Iranian President Hassan Rouhani during his recent trips to Europe threatened that if Iran’s oil is not allowed to be exported through the Persian Gulf due to the US sanctions, then the oil of no other country in the region can be exported.

The Leader on Saturday described Rouhani’s comments as very important, saying that they showed the policy and approach of the Islamic Establishment of Iran.

“The foreign ministry is duty-bound to seriously pursue such stances held by the president,” he added.

“The main and real goal of diplomacy is to protect national interests. Having interaction or clash [with other countries] are just ways to secure the national interests,” Ayatollah Khamenei said, stressing that Iran’s national interests are derived from the major policies and values of the Islamic Republic, which must be protected by the foreign ministry.

Ideology Not Separate from Diplomacy

“Some wrongly talk of the need for making a distinction between diplomacy and ideology; however, there is no problem with ideological diplomacy, and it is not right and logical to imply there is a clash between ideology and national interests,” the Leader noted.

“Ideology seeks to secure and maintain the country’s national interests, and is considered as a nation’s identity,” he went on to say.

The Leader referred to the ideology-based behaviours and policies of Western governments, saying, “Americans frequently use the expression ‘American Values’ in their remarks. This is their ideology derived from the US Declaration of Independence.”

“Even in European countries, ideological thoughts dominate their political behaviours and activities,” he noted.

Ayatollah Khamenei also noted that the country’s policy of establishing wise, smart, targeted, and logical ties with the world is inspired by the Islamic view of the Establishment and totally based on ideological diplomacy.

The Leader also referred to the enemy’s psychological war against the Islamic Republic, and said the accusations of breaching democracy, lack of freedom, and violation of human rights in Iran are all part of the psychological war and Iranophobia project pursued by the adversaries.

Ayatollah Khamenei also blasted the crimes committed by Europeans and Westerners in the time of colonialism, the limitations of democracy in the West, the partisan dictatorship in the US and some European countries, and the West’s current crimes including their role in the Saudis’ slaughter of Yemenis.

“Westerners are symbols of violating human rights, but blatantly raise accusations against Iran, in a way that one is sometimes surprised to see how shameless they are,” he added.