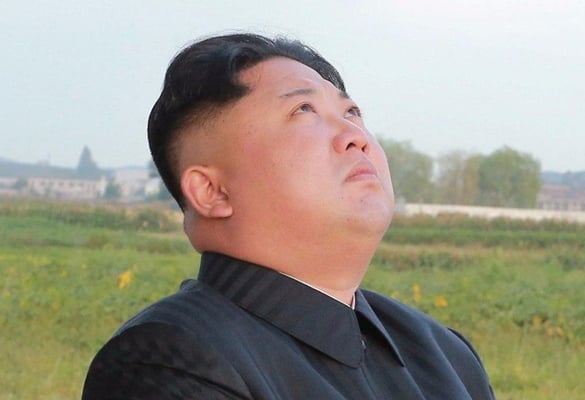 An analyst says the North Korean leader has backed down from his position fearing he might suffer the same fate that former Iraqi and Libyan leaders underwent.

North Korean President Kim Jong-Un finally went to meet his South Korean counterpart Moon Jae-In for the first time and agreed to end the Korean War, 65 years after the last armistice. They agreed the Panmunjom declaration committing to seek “complete denuclearisation” of the peninsula.

Earlier, Kim had told Moon on the phone that he has abandoned Pyongyang’s nuclear program in order to avoid the “disastrous” fate that former Iraqi strongman Saddam Hussein and Libya’s ex-dictator Muammar Gaddafi underwent, Moon was reported by South Korean media as saying.

Based on the same report, Kim’s decision to stop tests of ballistic missiles as well as nuclear tests comes to prove his determination to forgo the country’s missile and nuclear programs.

Saddam Hussein was sentenced to death after he was tried in court in 2006. Muammar Gaddafi was also killed by his opponents during the Libya revolution in 2011. Both leaders lost their lives following foreign intervention by the US and its allies.

Official media had already announced that North Korea would suspend its nuclear and missile tests as of Saturday April 21, 2018, and would shut its nuclear tests site.

North Korea’s official news agency had quoted Kim as saying that his country no longer needed nuclear tests or the test-firing of intercontinental ballistic missiles (ICBMs) because he had already reached his nuclear weapons development objectives.

Mike Pompeo, the former CIA director and the secretary of state nominated by Trump, met Kim recently, setting the stage for a meeting between American and North Korean leaders.

Of course, other sea changes are in the offing in North Korea. The country is on course to further opening up the political and cultural climate in society.

Many have described Pyongyang’s recent measures as a sort of retreat in the face of Washington’s firm positions. Now the question is whether Kim has retreated because of the US pressure, or that he has learned lessons from the fate of doomed dictators.

Mehdi Motaharinia, an analyst of international issues, has, in an interview with the Persian-language Fararu website, weighed in on the issue.

“The world is on the brink of the emergence of a new order. The United States of America was seeking a unipolar world, but the world does not accept extensive hegemony and a unipolar globe after stepping into the 21st century and the expansion of communications. So, a line has to be drawn between the management of the world and leadership of the world,” he said.

“Kim’s getting along with the US was undoubtedly prompted by China’s green light,” he noted.

“By giving the green light, China has accepted to set the stage for a final competition in the international system while retaining its intense rivalry with the US over various regional and international issues. The current trade war between China and the United States should also be analyzed within this framework,” he said.

“So, North Korea has now found out that if it wants to get into confrontation with the US, such a move would set the stage for Kim to suffer the same fate as Saddam Hussein and Gaddafi’s due to a lack of support by China,” he noted.

According to the analyst, Kim believes if he does not clinch a major deal with the Americans, he will have to pay a heavy price.

“Therefore, in order to avoid paying this heavy price, it has begun to retreat. In fact, from Kim’s perspective, this is the best thing to do in the worst situation he is in now,” the commentator noted.

The analyst was asked whether the North Korean Leader would have undergone the same fate as the doomed dictators if he hadn’t backed down from his position. In response, he answered, “I believe Libya and Iraq had special dossiers of their own. Every country has its own special situation and features, though it might have similarities with other countries as well. So, every government, country or geographical region should be reviewed in light of its own specific features.”

“Incontrovertibly, both Kim Jong-Un, as the leader of North Korea, and the US and their allies understand this issue very well. However, what became of Iraq and Syria could happen to North Korea as well,” he noted.

“What was regarded as US threats to Kim set the stage for his retreat,” said the analyst.

“Let’s not forget that Kim had threatened the US with an atomic attack. The Americans used the opportunity and described his threats as a challenge and tried to see the threat as an opportunity. So, the Americans managed to lay the groundwork for dispatching large numbers of military troops to the Korean peninsula,” he said.

“So, Kim Jong-Un’s threat was seen by the US as a challenge and muscle-flexing, not as a threat, and the US capitalized on the opportunity and increased the number of its military troops in the region.”

“Today, Kim Jong Un has realized that his threats have turned into an opportunity for the US. On the other hand, the US is working with China, Russia and its European allies to create a new uni-multipolar order based on compound hegemony. That means the US would assume the leadership of the world, but would divide the world into five major geographical regions and would hand over the security of each of those regions to a superpower, so that handling security will be coordinated with the US management of global security,” he said.

“The United States’ plan to create the world’s future order based on the theory of compound hegemony smacks of an attempt to create a uni-multipolar world in which the US will be the hegemon of global security and will take over the management of security in the world. On the other hand, Russia, China, Germany, France and Britain, despite being involved in intense competitions with the US, will accept to manage the security and future of the world in different geographical regions, and will fall into step with the US. Now, the United States seeks to have the security of East and Southeast Asia managed with an eye on China and through the cooperation of South Korea, Japan, and, in the future, North Korea. The US also wants India to make its presence felt in the process.”

“The trip is in line with the same plan. Kim Jong-Un travelled to China before announcing his retreat as well as a historic meeting with Trump, and received a green light from Beijing. Of course, this is just the beginning of the path, and more surprises might emerge on the way, and all players might break the rules of the game.”