IFP has taken a look at the front pages of Iranian newspapers on Saturday, June 1, 2019, and picked headlines from 18 of them. IFP has simply translated the headlines and does not vouch for their accuracy.

All Iranian papers today covered the massive Quds Day rallies held in Iran and other parts of the world in solidarity with the Palestinian nation and in condemnation of the Israeli atrocities.

The majority of headlines highlighted the demonstrators’ slogans against US President Donald Trump’s so-called peace plan for the Middle East, known as the “Deal of the Century”.

Also a top story was the comments made by the Leader of Iran’s Islamic Revolution Ayatollah Seyyed Ali Khamenei in a meeting with a group of academics and university professors.

1- No to Deal of the Century

2- Rouhani: Deal of Century Will Turn into Bankruptcy of Century 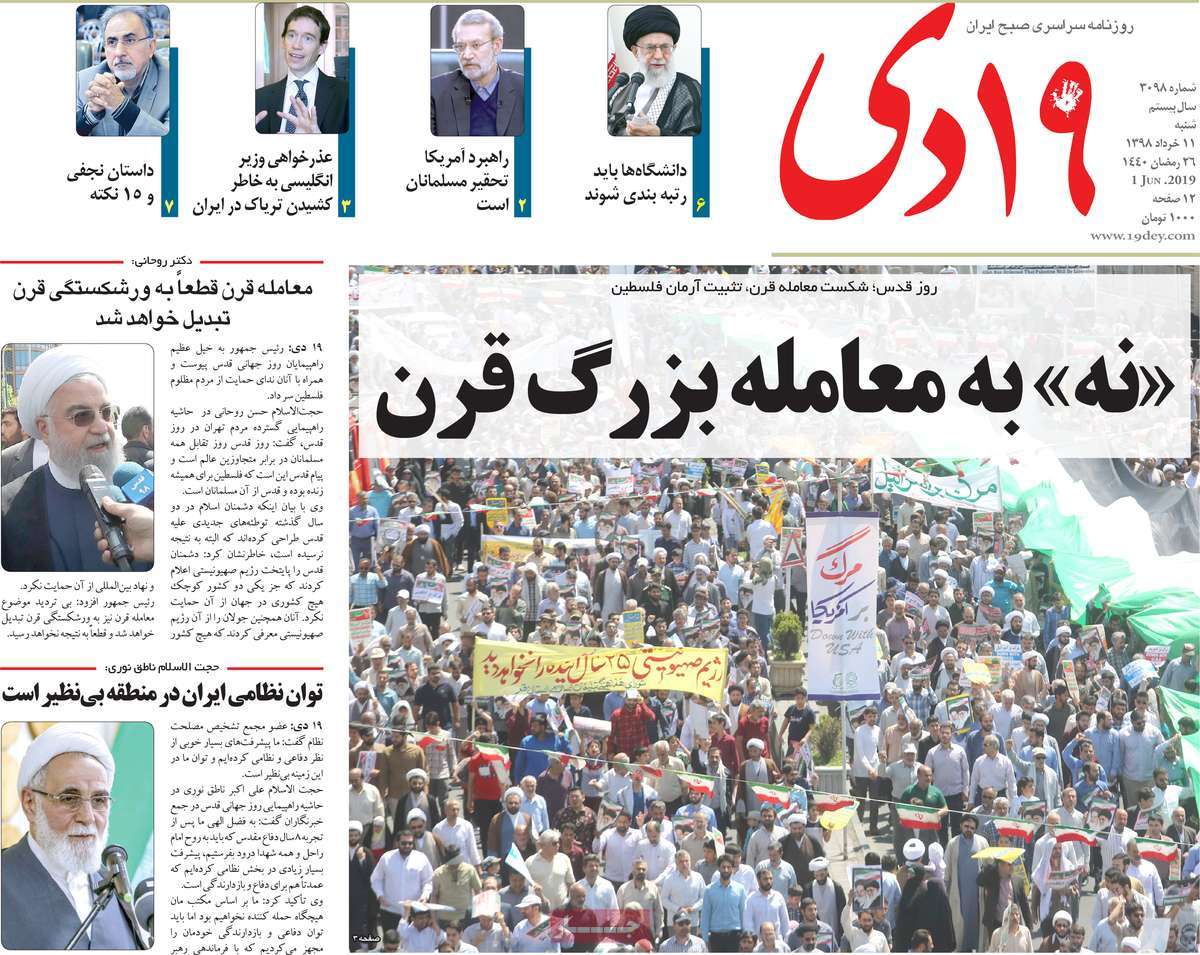 1- Lavrov: We Won’t Impose Our Mediation on Iran, US 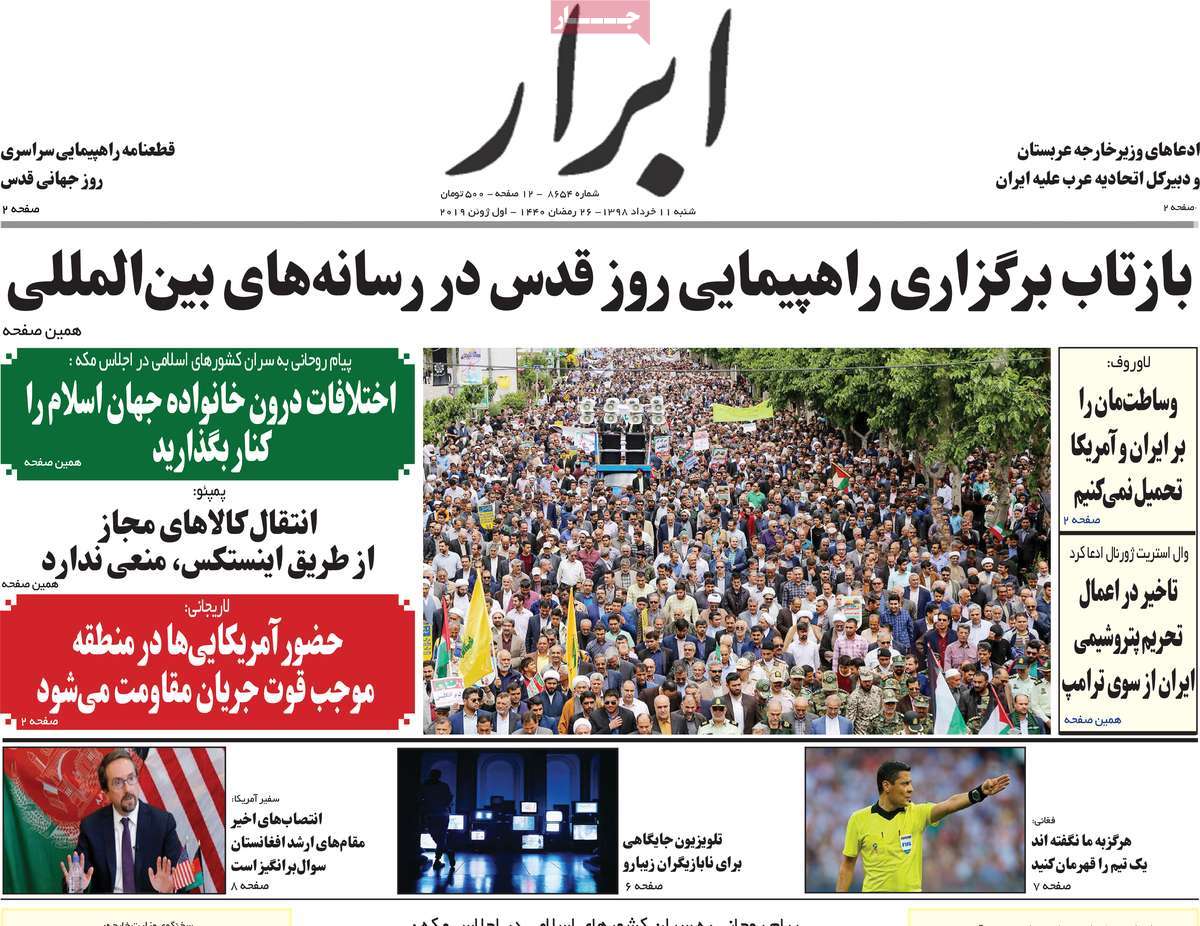 1- Message of Quds Day: Failure of Deal of Century, Stabilization of Palestinian Cause 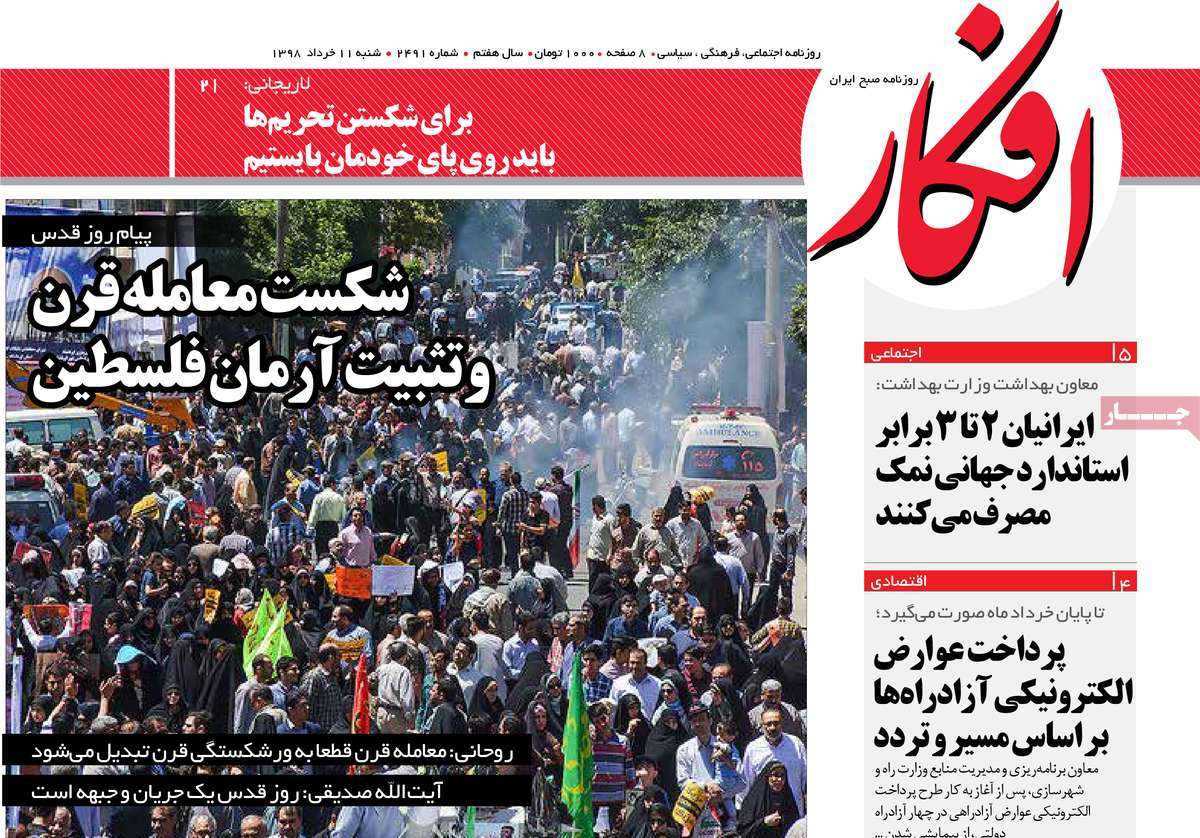 1- Demonstrators Say No to Deal of Century

2- Iran Leader: We’ll Use Leverage at Our Disposal to Reduce US Pressure 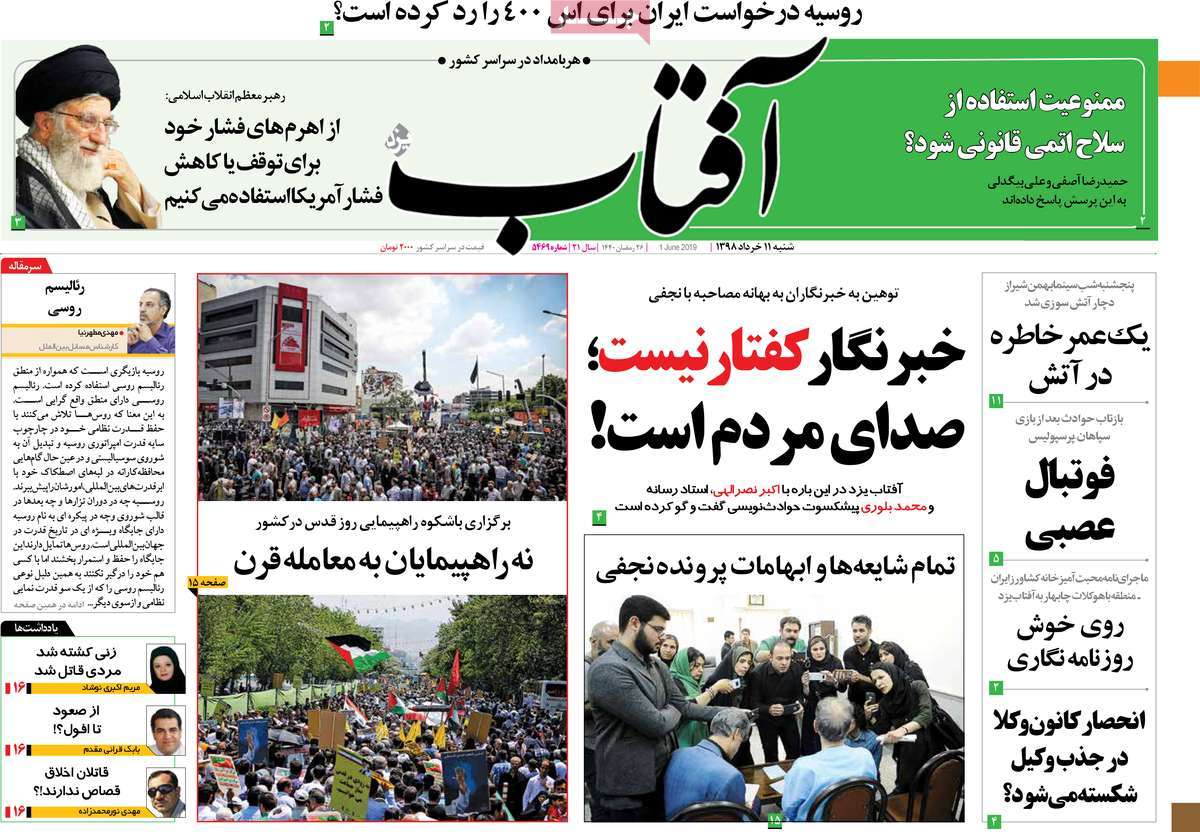 1- Deal of the Century Isolated

2- Iranophobic Meeting in Mecca: Saudi Arabia Repeats Being a Loser 1- Iranian Nation Says Big No to Deal of the Century

* Iran Turns into Scene of Popular Support for Palestine

2- Rouhani’s Message to Muslim Leaders in Mecca: Put Aside Differences Inside Muslim World 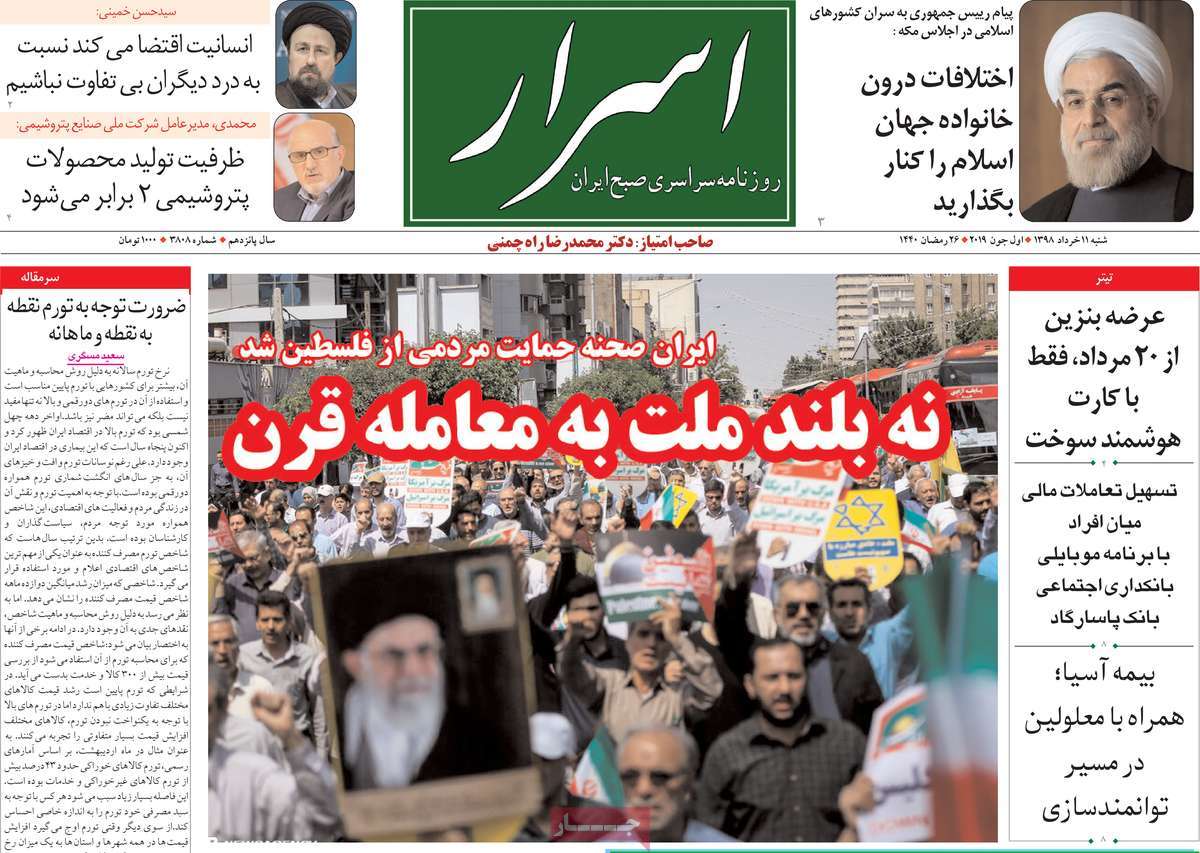 2- Rouhani: Deal of the Century Plot to Destroy Palestinian Cause 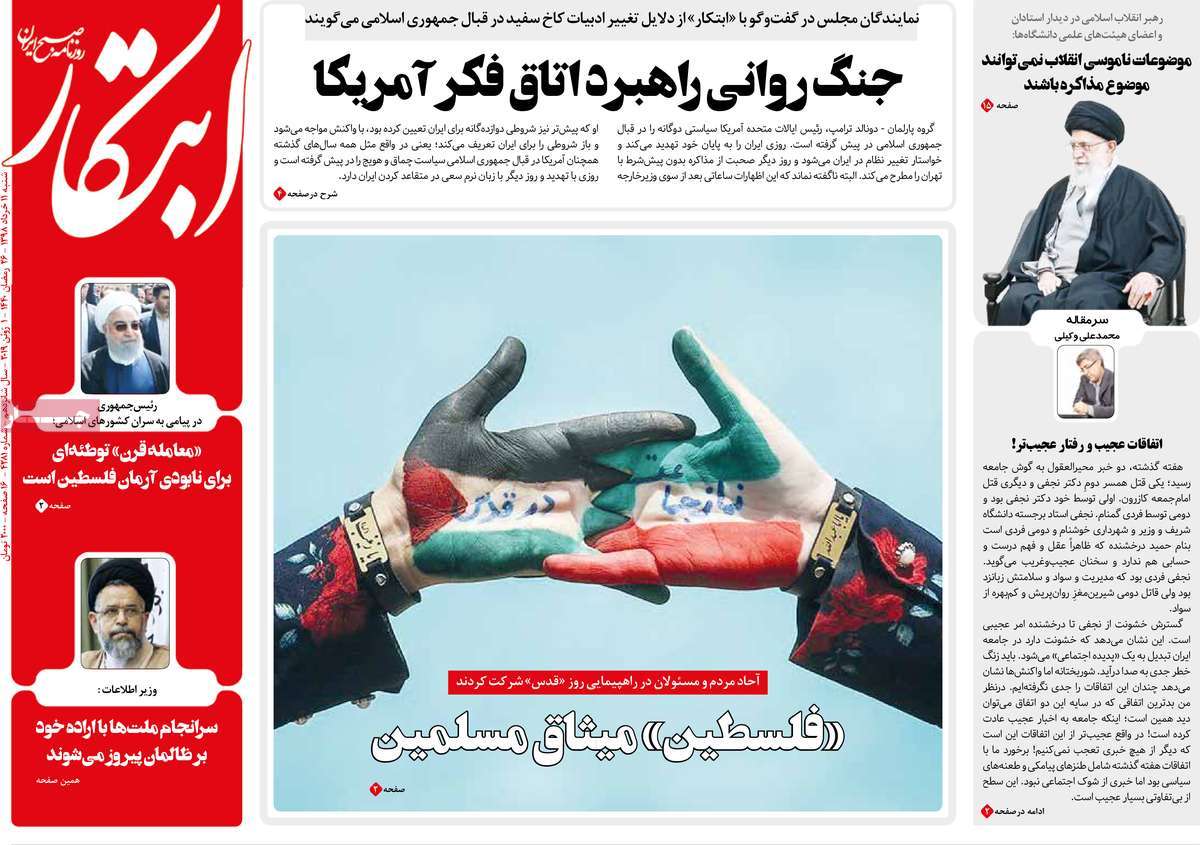 1- First Qibla of Muslims Not for Sale

* Harsh Response to Deal of the Century 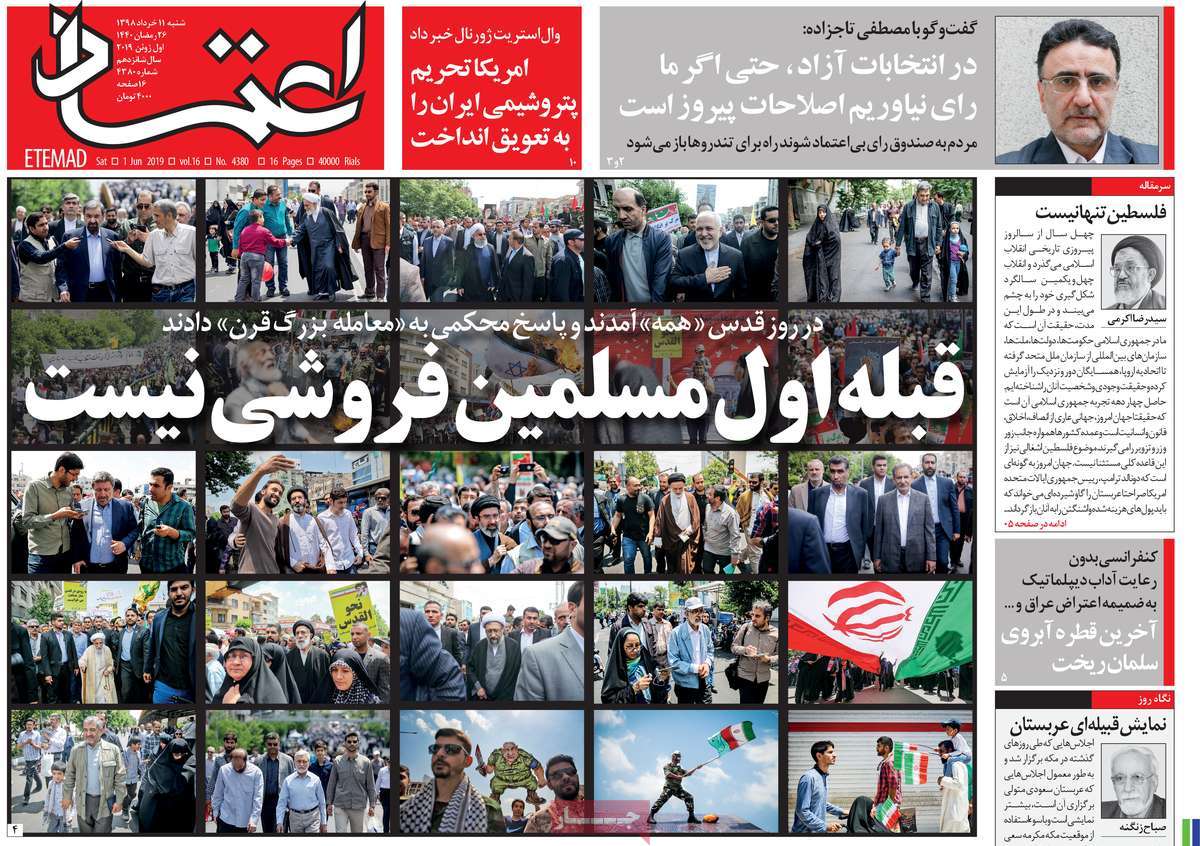 1- Millions of Iranians Rally in Support of Palestine * Fasting Iranians Chant Support for Free Palestine, No to Deal of Century 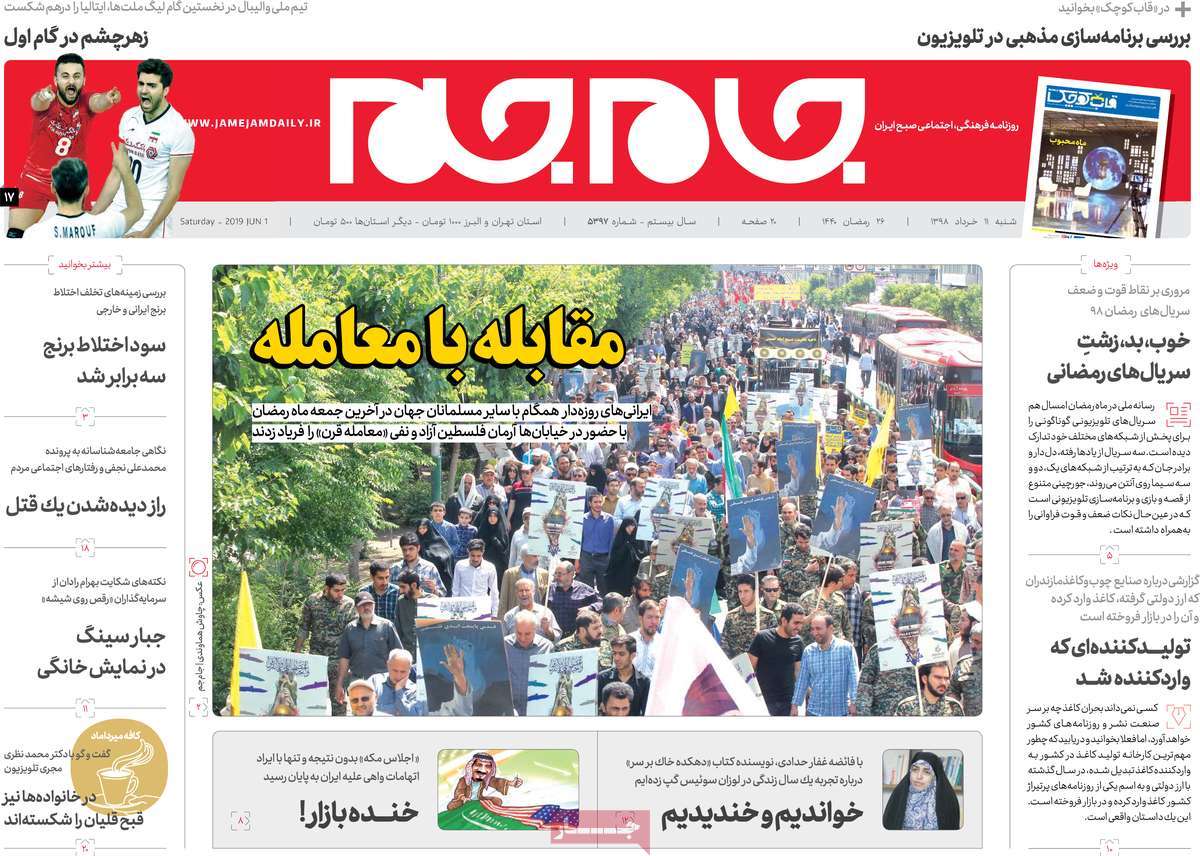 2- Trump: We Want to Deal with ‘Weakened’ Iran

3- Arabs Selling Their Qibla in Mecca 2- Zarif: Quds Not for US to Be Gifted, Not for Israel to Be Seized 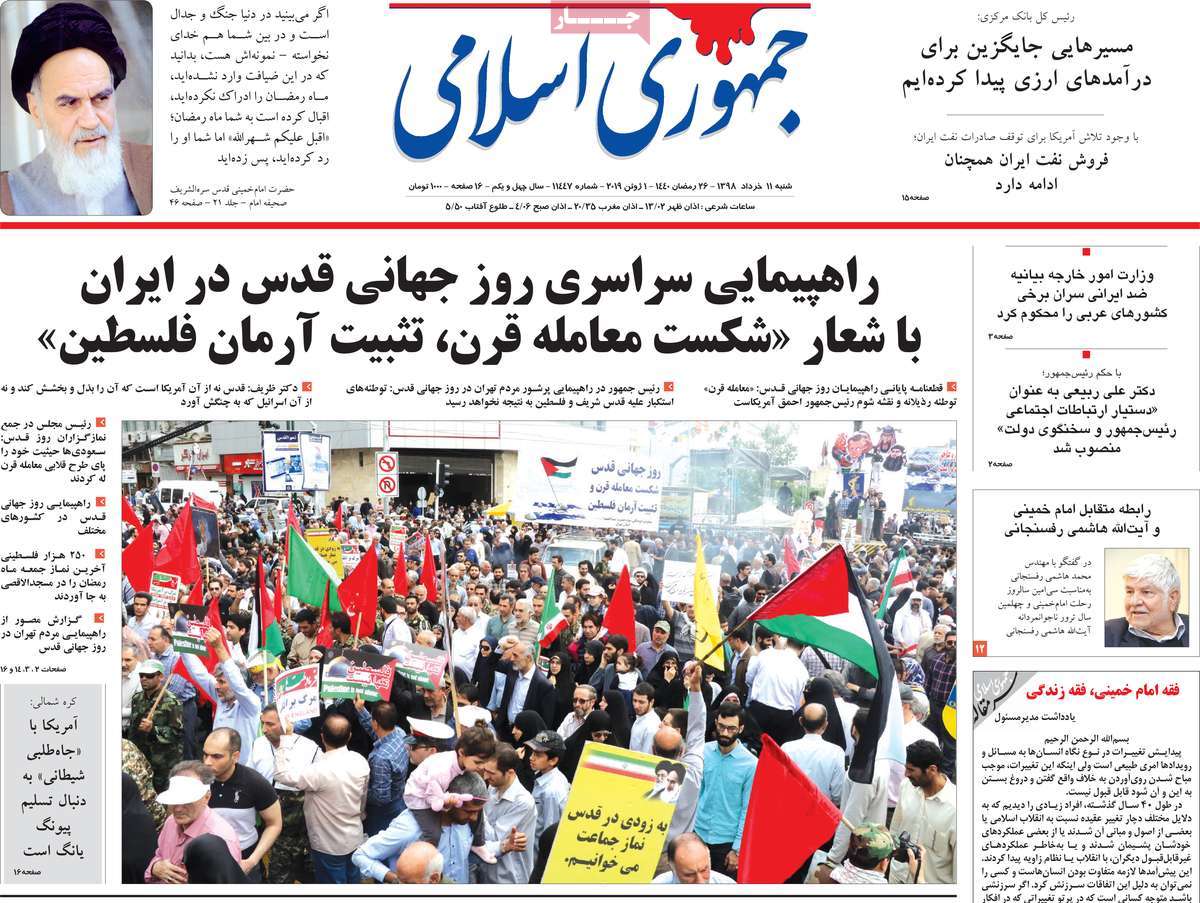 1- Deal of Century Turns into ‘Resistance of Century’ with Massive Rallies in Iran, 120 Countries 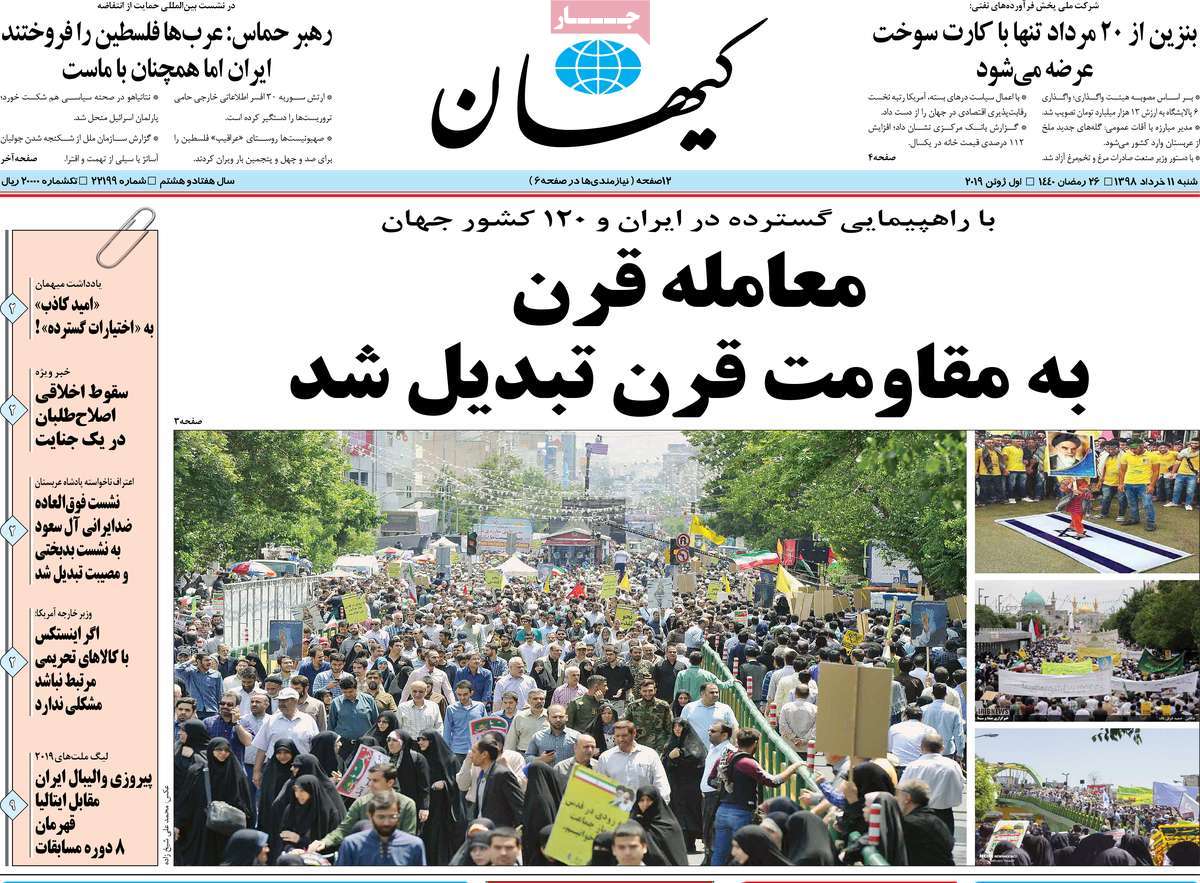 1- Truth of the Century

* World’s Freedom Seekers Rise against Those Who Betrayed Palestine Cause 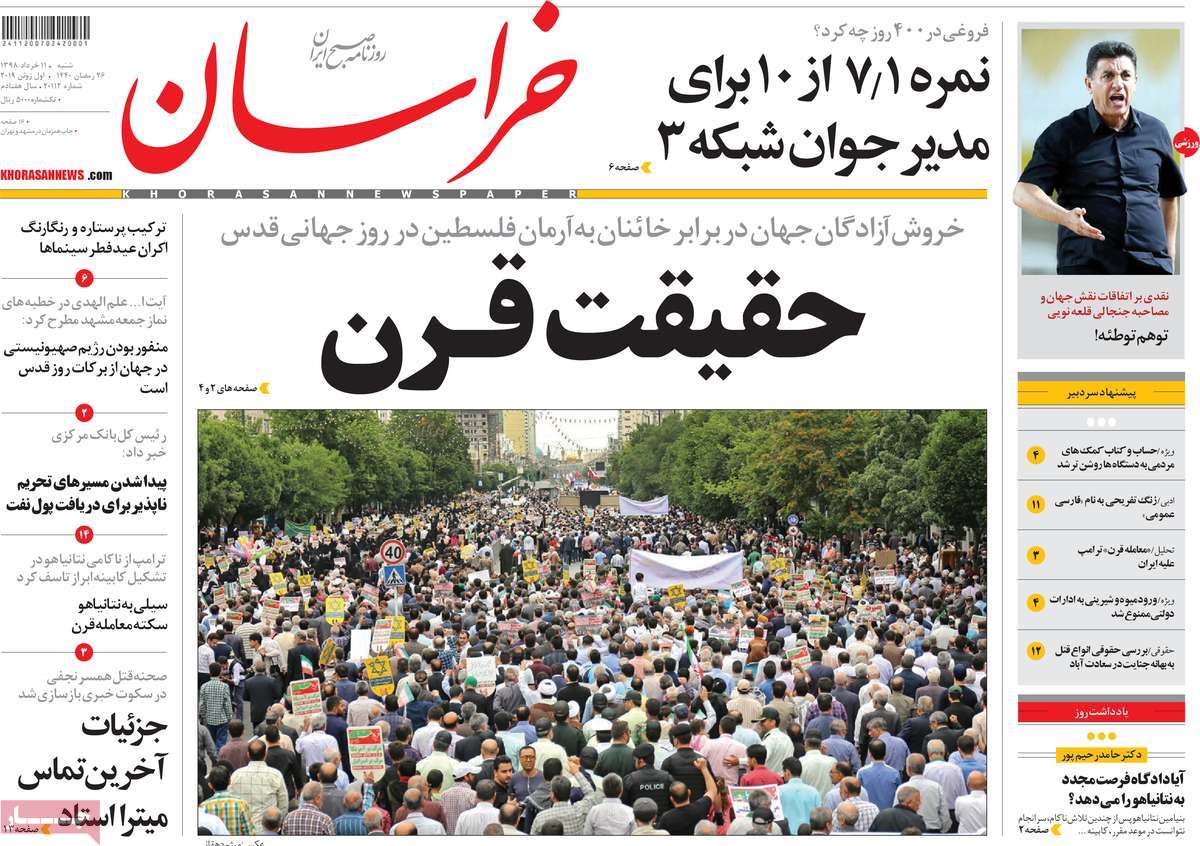 1- Deal of the Century under Feet of Fasting People 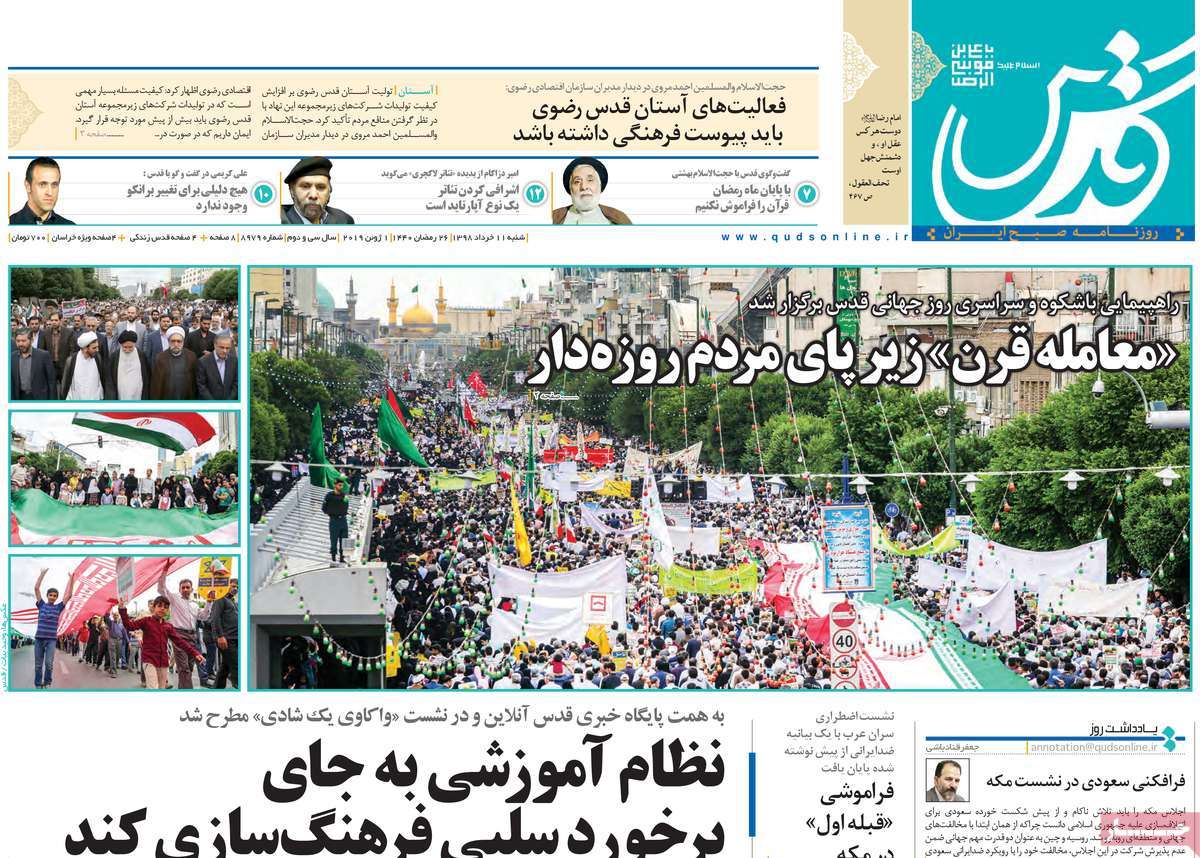 1- Defeat of Deal of the Century 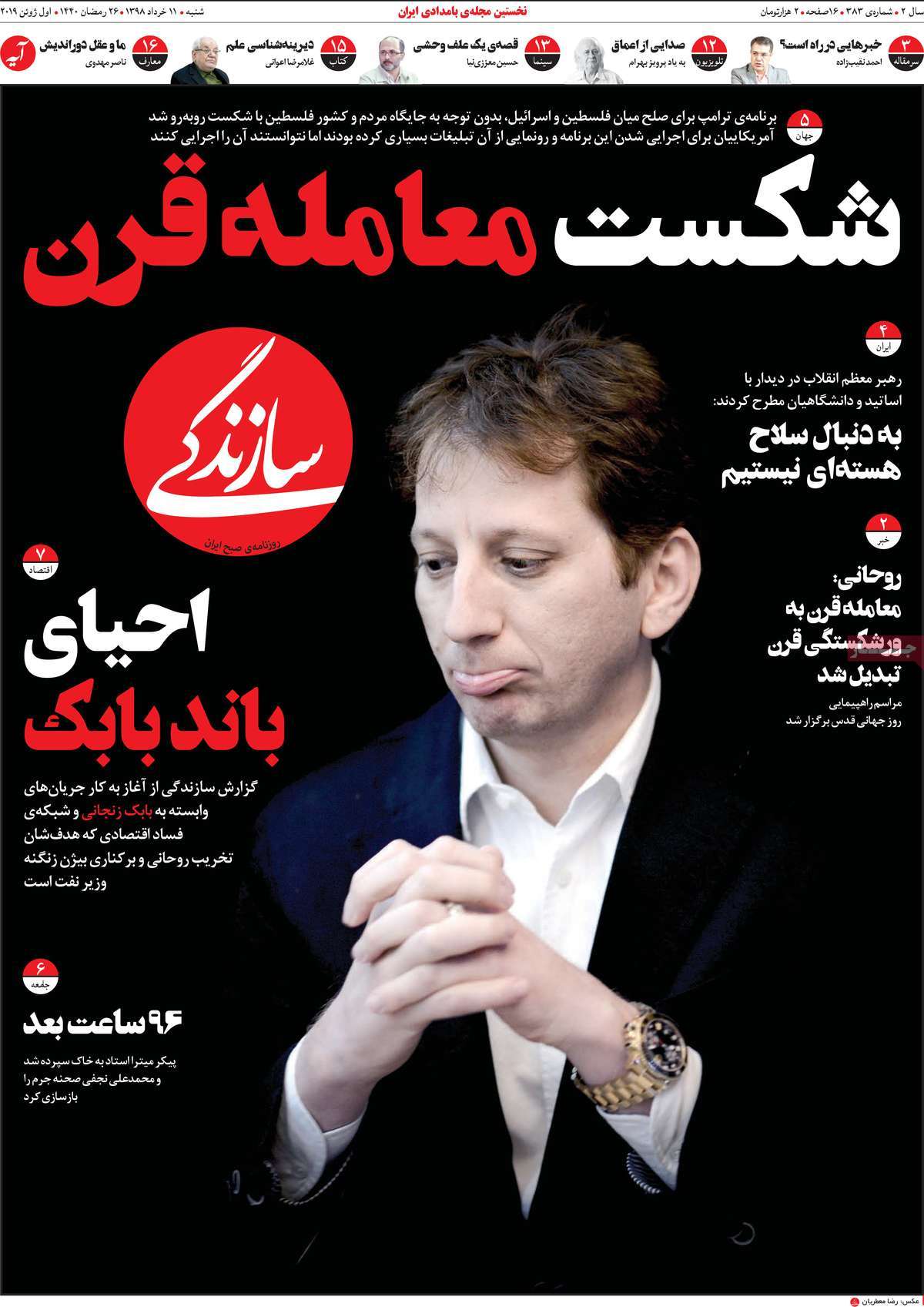 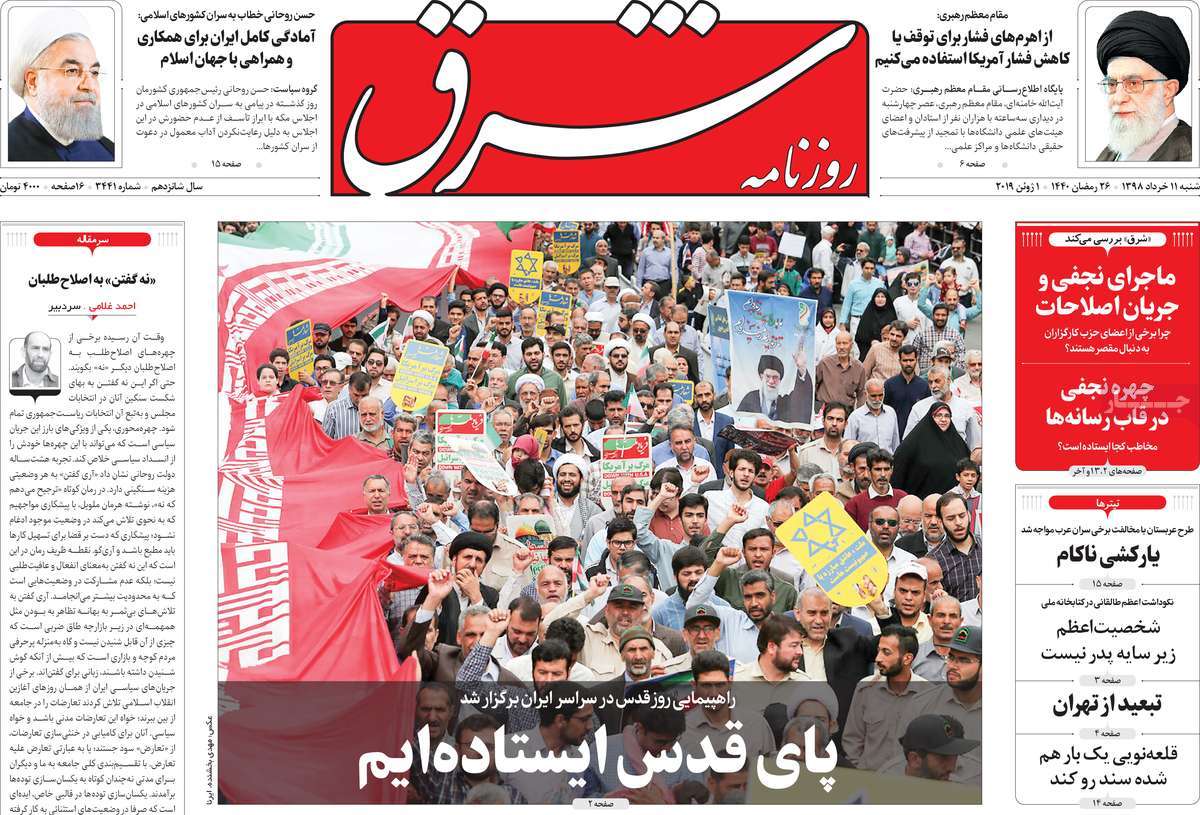