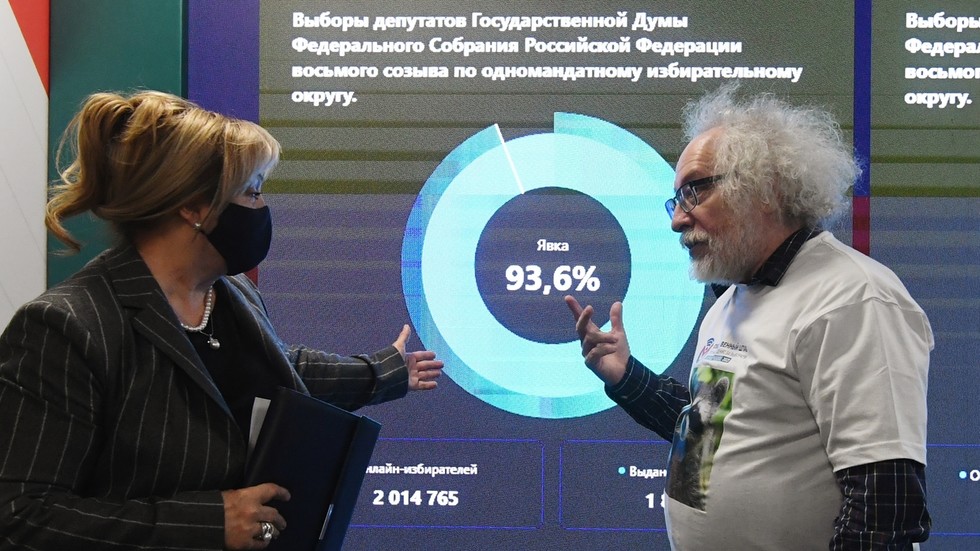 “Despite the unprecedented number of cyberattacks on the Russian Central Election Commission [CEC], half of which were recorded from the US territory, and despite US Internet platforms’ overt interference in preparations for the elections, our enemies failed to discredit the Russian electoral system and they will never manage to do it,” Zakharova added at a briefing.

Russia held legislative elections on 17-19 September. The State Duma is elected for a five-year term under a mixed electoral system — 225 lawmakers are elected on party lists, and another 225 on single-mandate constituencies in one round.

According to the official results, five parties have managed to make it into the Russian parliament, these are United Russia, the Communist Party, A Just Russia, the Liberal Democrats, and New People.

The United Russia Party has won the elections for the State Duma (the lower house of parliament), gaining 49.83 percent of the vote. The Communist Party comes second with 18.93 percent, the Liberal Democratic Party is in third place with 7.55 percent. A Just Russia – for Truth party secured 7.46 percent, and New People got 5.32 percent.

Fresh tensions have erupted between Moscow and Washington after Russia accused the United States of being behind cyberattacks during last week’s parliamentary elections.

The Russian Embassy in the United States slammed as ungrounded earlier accusations of the US Department of State on allegedly ‘non-transparent’ parliamentary elections in Russia, TASS reported.

“We have taken note of the groundless accusations of the US Department of State on the alleged ‘non-free and non-transparent’ elections to the State Duma of the Russian Federation, which took place on September 17-19,” the Russian diplomatic mission in the United States said in a statement on its FaceBook account.

“In this regard, we emphasize: the expression of the will of the people took place in full compliance with the provisions of domestic legislation and the norms of international law,” the statement reads.

“Any claims to the contrary are unacceptable. Any irregularities did not have impact on the overall course of the voting and cannot affect the results of the election campaign,” the statement added.

The Russian Embassy to the United States also stated that it was now waiting for the United States’ authorities to come up with detailed explanations regarding reported cyber-attacks, which came from the American territory during the parliamentary elections in Russia.

“At the same time, we note that during the recent elections, the Central Election Commission of Russia faced an unprecedented number of cyber-attacks,” the statement said, adding that “50% of them were detected to be conducted precisely from the territory of the United States”.

“The purpose of these hacks is to discredit our electoral system,” according to the Russian diplomatic mission.

“We would like to receive detailed explanations of this case from the American side,” it announced.