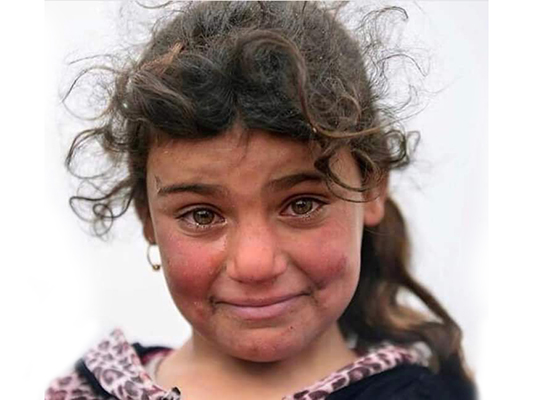 A picture has been widely circulating on social media in recent days showing the face of a young girl who has managed to escape the ISIS terrorists. The girl has been dubbed the modern-day Mona Lisa as her face shows a mixed expression of fear, shock, sadness, hope and happiness.

Some 514 years have passed since Leonardo da Vinci created the Mona Lisa, his most famous painting, and now the world is witness to the creation of another Mona Lisa while the painter has been dead for 498 years.

The modern-day Mona Lisa is not an oil painting showing the portrait of a mysterious woman produced by the paintbrush of a distinguished painter using delicate shading.

This time, fear and consternation has led to the creation of real life Mona Lisa, according to a Farsi report by ISNA.

She should be in her mother’s arms now with her braids ornamented with colourful ribbons. The sound of her laughter should be reverberating in his father’s ear. She should be playing childish games, be happy and act like a normal girl of her age. Nevertheless, only God knows how frightened she had been when her mother had been running away from the ISIS terrorists while panting heavily.

In 1503, da Vinci created the Mona Lisa on canvas with a number of paintbrushes and oil paints. He worked on his work of art for four years to be able to paint a mysterious face full of ambiguity.

The ambiguous expression on the face of da Vinci’s Mona Lisa is an outcome of four years of incessant hard work by a painter who left his artwork unfinished in the end. Now, in the early years of the present century, the modern-day Mona Lisa’s picture displays a young girl’s face full of fear and sorrow with a faint smile on it. The girl’s bitter smile is the consequence of an intense fear and speaks of her profound sorrow caused by utter horror.

The Mona Lisa of 21st century is confused and sad. She is scared. Her eyes are filled with tears. She is not old enough to be dubbed Mona Lisa. Nevertheless, no other name suits the innocent face of a young girl that displays these emotions all at once.

The face of the 21st century’s Mona Lisa has caused the heart of millions to ache even though those who should feel the ache fail to do so. It is as if they fail to see the little girl’s bright eyes, let alone to feel sympathy for her.

She is doing her best to smile in this photo which has been taken of her right after she managed to escape the ISIS terrorists.