Millions of Iranians rally to mark anniversary of Islamic Revolution 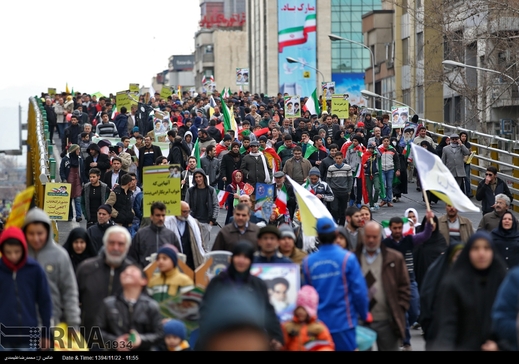 Millions of Iranians are taking to the streets in various cities and towns across the country to commemorate the 37th anniversary of the victory of the Islamic Revolution.

The nationwide rallies on Thursday mark the victory of the 1979 Revolution, led by late Imam Khomeini, which put an end to the monarchical rule of the US-backed Pahlavi regime.

On February 11, 1979, the 22nd of the month of Bahman on the solar calendar year of 1357, the monarchy of the Pahlavi regime in Iran was overthrown after months of public unrest and protest.

On Thursday, the anniversary of the Revolution, people took to the streets all over the country, including the capital, Tehran, in their millions to remember the day and the sacrifices they made during the Revolution, which saw the Pahlavi regime cracking down on protests and demonstrations ruthlessly.

Various Iranian officials joined the Thursday rallies to remember the Revolution and voice continued support for it.

Iranian President Hassan Rouhani joined the rallies in Tehran on Thursday. President Rouhani is due to make a speech on the occasion later in the day.

Commander of the Quds Force of Iran’s Islamic Revolution Guards Corps (IRGC) Major General Qassem Soleimani was one of the senior officials joining the rallies in the capital.

More than 5,200 journalists from Iran and other countries are covering the nationwide rallies.

Iran’s scientific and defensive achievements, including the indigenous Simorgh (Phoenix) satellite carrier and the precision-guided long-range Emad ballistic missile are on display on the routes of the rallies on streets of Tehran.