A call centre opened by an Iranian company monitors all the patients who have bought the “Migraine Cut” spray, a new medicine that can treat migraine headaches.

Migraine Cut is a product of the knowledge-based company Mim Daroo, which was launched 13 years ago in Iran with the aim of treating migraines.

Out of the 2,000 patients who took the drug, 79% reported that their pain has stopped. 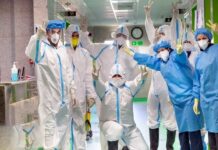