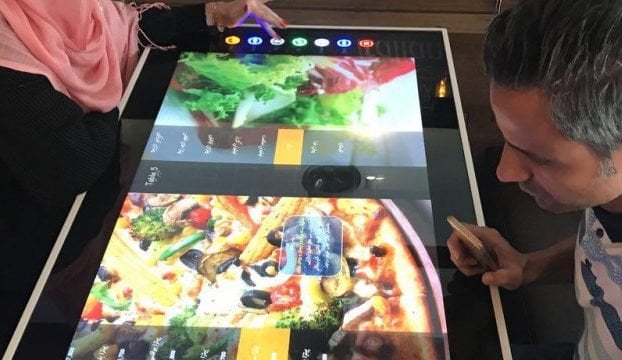 RoboChef, the first interactive, robotic, and waiterless restaurant of the Middle East, has flipped the tables on how citizens of the Iranian capital eat out.

Robochef is a restaurant that opened recently in north Tehran and it has flipped the tables on how we eat out.

The restaurant which quietly opened a few months ago has now hit the headlines because it is the first robotic and ‘waiterless’ restaurant in the Middle East.

Owner of the restaurant, Hossein Zibadel, told Financial Tribune that the initial goal is to help “people become familiar with modern technology, not just to watch it on television.”

Zibadel said he was surprised by the public interest in his idea. “I really didn’t expect such a great response… they waited outside for hours until they could try out our restaurant.”

The trend is quite new in the country as no other food caterers have so far offered interactive tables and robotic services; however, several other restaurant owners have tried delivering similar smart ordering systems without the pizzazz.

A local knowledge-based company, Aran Touch, is behind the offering of smart tables. The firm has been developing the services for a couple of years, and the order from Zibadel helped it further, according to the CEO of the firm.

Hossein Kashani, told the Tribune “the technology could help eliminate the problems restaurant-owners and managers face on a daily basis.”

As restaurant technology continues to improve, industry professionals are gaining new resources for promoting their goods and services and attracting customers.

Kashani said Robochef’s technology, features multi-touch smart tables that allow customers to choose their dishes down to the smallest details like pizza toppings.

Food is then served by robot pulley system, directly to each customer’s table.

“The new technology can help restaurant owners better manage their patrons’ requests as they deliver exactly what customers want in their meals.”

He added the information is then transferred to chefs, and the ordering process is streamlined for efficiency and accuracy.”

The smart restaurant system can be applied to caterers of all sizes, cafés, food courts and food stalls, no establishment is too small for implementing parts of the digital system.

Kashani says to entertain customers at the tables games and social media apps have been added so that they can “enjoy waiting”.

Customers want a way to subtly catch their servers’ attention, as opposed to waving frantically, shouting, or just sitting in silence. “The smart ordering system can easily eliminate this problem.”

Other features of the new smart systems include, tracking of food orders, and on-the-spot payment.

Another feature, which is optional for restaurant owners, is the addition of live cameras inside the kitchen, however, the tech developer did note that not all restaurateurs are enthused by the monitoring system.