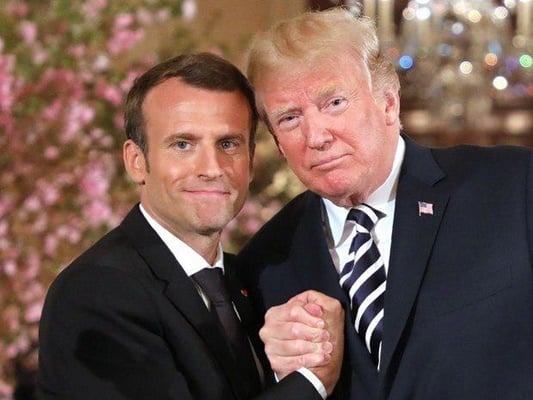 As speculations have risen about US President Donald Trump’s pulling out of Iran nuclear deal in May, European leaders’ visits to Washington to hold talks with US officials have grabbed the attention of the observers.

One of these visits, which, according to some experts, is the most important one in recent weeks or months, is that of French President Emmanuel Macron who tried to persuade his US counterpart to remain in the deal. What follows are highlights of a Farsi piece by Tasnim News Agency on the visit and its repercussions:

Western media during the past weeks directed special attention at Emmanuel Macron’s visit to the United States and his meeting with Donald Trump. The New York Times, in an exaggerated report, said that maintaining the JCPOA depends on the agreement between the French president and Donald Trump.  Meanwhile, some other US and European media outlets assessed the visit as the most important one to determine what would finally happen to Iran nuclear accord.

However, Western media were well aware of the fact that the meetings between the presidents of the two countries have been in process since a long time ago, and Macron had already been aware of Tramp’s stance on the Joint Comprehensive Plan of Action.

In another word, the joint game by the US and France regarding the deal has been launched since a while ago, and Macron’s visit to the United States was merely a pre-determined show by Washington and Paris to perform a new political and military operation against Iran.

The reality is that Macron and Trump are in the final stage of the completion of the puzzle whose plan has long been drawn up. Their plan is to “permanently disarm” and “limit Iran’s missile and nuclear capabilities” simultaneously.

Assuming the games played by the United States and Europe as separate ones at this critical time is the biggest strategic and computational error in dealing with recent developments. It should be taken into consideration that Washington and the European troika are seeking a “common goal” to complete a “predetermined process.”

The only thing that can overcome this common game and prevent the completion of such a dangerous process is Iran’s emphasis on refusing to renegotiate the JCPOA, and not accepting the slightest change in the nuclear deal, as well as stressing that Tehran will not remain in the deal if Washington leaves it.

In the course of the nuclear talks between Iran and the P5+1, the main task of French Foreign Minister Laurent Fabius was to help the US in putting pressure on Iran. He repeatedly played the role of the bad cop during the nuclear talks in order to complete the joint picture envisaged by US Secretary of State John Kerry and other foreign ministers of the western countries. In the course of nuclear talks with Iran, the French had become a catalyst and an accelerating factor to help Washington achieve its goals.

Although François Hollande and Fabius are not in office anymore, Emmanuel Macron and Jean-Yves Le Drian are playing the same destructive role regarding Iran. While Macron prefers to wear a smile, along with the United States he plays a dangerous game that should not be underestimated.