Literally ‘Everyone’ in Iran Can Run for President!

Saturday was the end of the five-day registration process for those seeking the post of Iran’s president, the bulk of whom were ordinary, and even weird, people without any political background.

Based on the figures by Iran’s Elections Headquarters, a record-high number of 1,636 figures, including 1,499 men and 137 women, from all walks of life ranging in age from 18 to 92 registered to compete in Iran’s upcoming presidential election, among which are weird, funny and interesting characters who have brought the registration process for the Iranian vote into social media spotlight.

According to a report by IFP, the registration of so many people to contest in Iran’s May 19 presidential elections, on the one hand, indicates the opportunity given to all Iranian people to make their dream come true and play the main role in governing their country, and on the other hand implies that the current electoral regulations are so deficient that allows every person, regardless of their qualifications, to register for such an important position.

Who Has Not Registered?

Virtually anybody has the right to sign up to run in Iran’s presidential vote. Nevertheless, in order to be qualified by the Guardian Council to stand for the office, as stipulated in Iran’s Constitution there are a number of formal restrictions: Potential candidates must not be under 18, they are required to be among the country’s “religious and political personalities,” hold Iranian citizenship and believe in the principles of the Islamic republic and the country’s official religion.

In addition to the prominent political figures who have signed up for the presidential competition and meet the criteria for the position, numerous individuals have signed up for the race who vividly and extraordinarily fail to be qualified for the post and fall short of the necessary standards. Their presence has, however, become a source of entertainment for those who follow news about the upcoming election and a main topic for domestic and foreign media.

Aside from the striking age difference between the youngest, 18, and the oldest, 92, applicant, a large number of other factors have added to the weirdness of the bewildering array of the individuals who have signed up for the contest.

Among these interesting presidential hopefuls are two young identical twins, Hassan and Hossein Seyyedkhani. Their striking facial similarity must be what they have counted on as their trump card. Their picture, posted on social media, shows them standing in front of the portal of the Ministry of Interior, raising each other’s hands as a sign of [perhaps] victory.

Speaking to media, Hassan said if elected, he would appoint his twin brother as foreign minister. Addressing the reporters, Hossein noted that he refrained from registering out of respect for his brother, who, he said, is his elder by two minutes.

Although not surpassing the twins in weirdness, the 19-year-old teenager from Chaharmahal and Bakhtiari Province in Western Iran is not a character to be overlooked easily. After signing up for Iran’s 12th presidential race, he listed his main plans as creating jobs and rescuing people from hardship.

Abol-Qassem Khaki is a factory guard in the central Iranian province of Yazd.  He says he plans to take a trip to the US and swim a race against the US President Donald Trump. Khaki added he also plans to provide ‘comfortable houses’ for young Iranians. He stressed that he had already prepared a list of the members of his cabinet, all of whom were his friends and neighbours!

The other presidential candidate was the professor of public policy and international development at Rutgers University, Houshang Amirahmadi. He had once told an Iranian news agency that if elected, he would focus on creating a thriving national economy and more jobs for Iran’s young population. He had also registered to compete in the previous edition of Iran’s presidential election.

A well-suited man who was wearing tie, was another funny character to sign up for the elections. He spoke unintelligible English to prove he is qualified for the post, if not overqualified!

A man around 55, holding a bright pink handbag and being suited up, also showed up for registration! No doubt, he deserves to be included in the list of extraordinary applicants.

Nasser Forqani Allah-Abadi also ran for the post. He has five wives and 18 children! He promised to legalize opium consumption and trade and to dissolve Law Enforcement Force of the Islamic Republic of Iran after coming into power as Iran’s president. He also urged Iranian ethnic groups and tribes to settle their disputes themselves. No doubt, he has already secured a large number of the addicts’ vote. 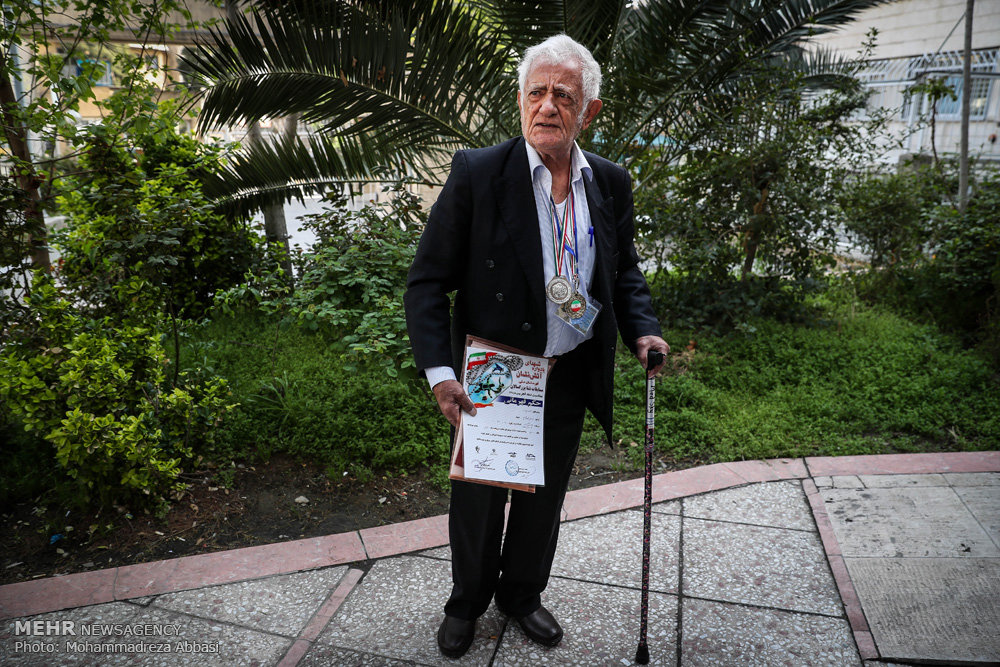 Born in 1929, he is one of the oldest individuals to have signed up for Iran’s May election. We all hope that, in case of emerging victorious in the race, he manages to finish his term in office. 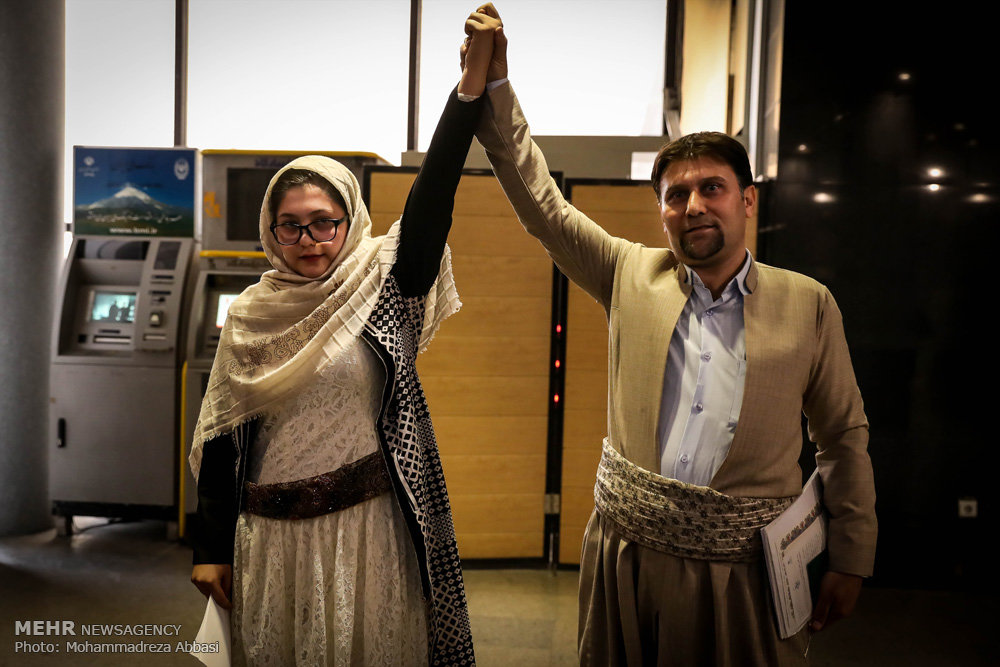 “Just happily married, let us celebrate by signing up for presidential election,” said the young groom and bride who went to the Ministry of the Interior to sign up for May’s vote.

He is only 12 and, most probably, born in 2005. By registering for the election he appears to have booked a berth for 2025 election, when he reaches the age of majority. However, it does not seem that he has managed to sign up, as he lacks the minimum age condition.

She favours secularism and seeks to carry out fundamental revisions in Iran’s Constitution. She also calls for the accurate defining of the term “statesman” and to what extent the second part of the word, “man”, limits women’s presence in political arenas and the country’s decision-making processes. Nothing seems odd about her save for her aspirations and demands.

Another 88-year-old grandpa. Seriously, is there a home for the aged nearby? Maybe they have got the wrong address! He has no presidential campaign slogan. He is just tired of the current situation in the country.

An almost 45-year old man wearing a white Karategi with his black belt around his waist. No kidding he is also among those who have signed up for the election. His photo posted on social media shows him while doing a split. At least, he might be able to scare the country’s enemies away.

Another odd candidate whose photo, posted on social media, shows him standing in front of the portal of the Interior Ministry holding up his stamped ID, is a baby-faced 32-year-old man who looks like a young adult.

A man of around 40 years old with curly bushy long hair and moustache. He could be an actor. But president, let experts decide.

Among those who have registered for the contest are a 5-year-old boy and a 3-year-old girl. Their fathers must have been either trying to be funny or too much confident about their children.

The girl’s father was from the southeastern Iranian province of Kerman. Nevertheless, authorities did not let her sign up.

Another funny individual was a man about 40, whose photos posted on social media show him while making funny, weird gestures.

What Do State Officials Say?

The lack of restricting criteria and regulations for registration to compete in the country’s most important and determining election, has not remained unnoticed by Iranian political statesmen and officials, with many sharply criticizing the shortcoming, calling for greater attention to the issue.

Commenting on the issue, Hossein-Ali Amiri, a member of the Central Executive Board of Iran’s upcoming presidential election, said, “Laws and regulations in this regard need to undergo a substantial revision. It is an inevitable move. The continuation of the current trend in registration for presidential election is quite costly and time-consuming.”

Referring to the same issue in an Instagram post, Secretary of Iran’s Expediency Council Mohsen Rezaei wrote: “It is scorning both the Iranian people and the country’s democracy that on the first day of the registration process, there comes an applicant claiming to be god, on the second day, another one calls himself a prophet, someone brings his child to sign up for the competition and foreign and domestic media publish photos and reports of these psychopaths as applicants for contesting in Iran’s presidential elections. The freedom in signing up for the election should not turn into a tool for broadcasting negative propaganda against Iranian people. The officials of the Ministry of Interior, the Guardian Council and media are required to prevent such [negative] advertisements to be displayed.”

Blasting the lack of sufficient criteria and preconditions that prevent incompetent individuals from signing up to run for the race, Iran’s Guardian Council Spokesman Abbas-Ali Kadkhodaei said, “Given the terms and conditions stipulated in the Principle 115 of the Constitution, many of those who have signed up will not qualify for competing in the election.”

He added no one should mistake the presidential election and its registration process for a festival.

“As stipulated in the Constitution, the presidency post, as the country’s second highest position, requires someone who has a broad managerial background.”

Kadkhodaei noted that the Guardian Council will begin reviewing the applicants’ qualification as of Sunday (April 16).

The number of the women applying to compete in Iran’s 12th presidential election has witnessed an increase compared to that of the previous edition.

This is while, all of the women applicants have been disqualified in the previous elections.

“Their disqualification, however, had nothing to do with their gender.”

Commenting on the same issue after running for president, Azam Taleqani, the daughter of the late Iranian theologian, Muslim reformer, democracy advocate and senior Shiite cleric Ayatollah Mahmoud Taleqani, said, “I am here to determine what does ‘man of politics’ – a term used to call statesmen and politicians in Iran – mean.”

Being the first-ever Iranian woman candidate hopeful after the Islamic Revolution, she said the term ‘political statesman’ does not denote that solely men are allowed to be appointed to key and administrative positions in the country, adding the word should also include women.

She has earlier registered to compete in Iran’s presidential election twice, in 1997 and 2009.