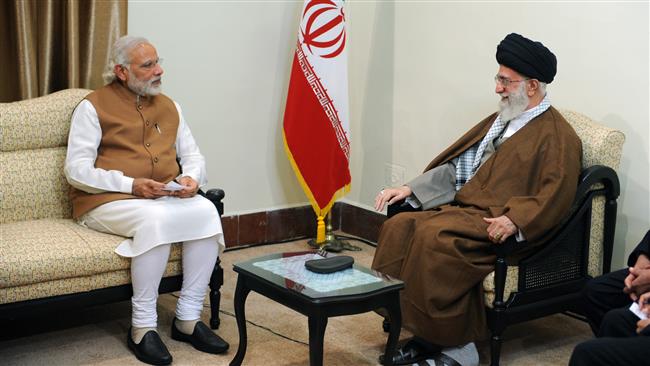 “Of course, such a fight must be conducted by those Muslim countries that are not following the US and Western policies because these countries have no real and serious intention for fight against terrorists,” Ayatollah Khamenei said in a meeting with Indian Prime Minister Narendra Modi in Tehran on Monday.

“The Islamic Republic of Iran is serious in the fight against terrorism and will exhaust all its potentialities for countering it,” said the Leader.

Ayatollah Khamenei warned that terrorist groups are recruiting forces in Muslim countries by taking advantage of some problems and weaknesses in Muslim communities.

“Countries must strip terrorists of such pretexts,” added the Leader.

Ayatollah Khamenei described terrorism as a contagious and dangerous disease and noted: “As with any contagious disease, terrorism can also be countered and curbed.”

The Leader said “genuine and serious fight on terrorism” provides the grounds for cooperation between Iran and India.

“Certain Western countries are not serious in the fight against terrorism and have been instrumental in the formation of terrorist currents in Afghanistan as well as terrorist groups in Iraq and Syria,” added Ayatollah Khamenei.

For his part, Modi echoed Ayatollah Khamenei’s call for a serious fight on terrorism and expressed regret over the division of terrorism into “good” and “bad” categories by some governments in a bid to overshadow the fight on this phenomenon.

He also said that the countries that are serious in fighting terrorism must close ranks.

The Indian premier arrived in the Iranian capital on Sunday for a two-day visit at the head of a high-ranking delegation to boost economic and political relations with Tehran.