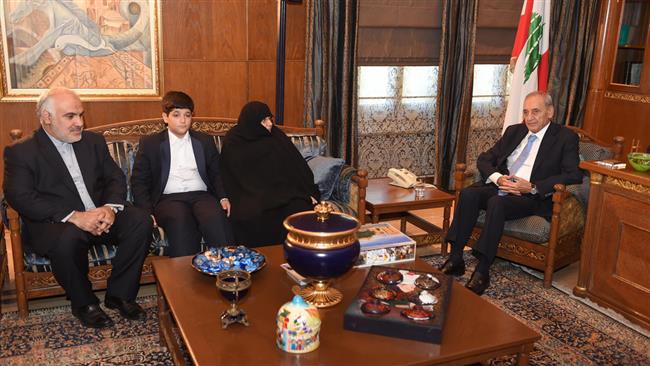 Families of the four Iranian diplomats kidnapped in Lebanon over three decades ago have called on Beirut to fulfill its responsibility and help determine the fate of their loved ones.

In a Saturday meeting with Lebanon’s Parliament Speaker Nabih Berri in Beirut, a delegation of the families said the Arab state has the responsibility to follow up on the case as the 1982 abductions took place on Lebanese soil, the Daily Star reported.

The families of the missing diplomats were accompanied by Iran’s Ambassador to Lebanon Mohammad Fathali during the meeting that was held on the 34th anniversary of the kidnappings.

On July 4, 1982, the year Israel invaded Lebanon, Ahmad Motevasselian, Seyyed Mohsen Mousavi, Taqi Rastegar Moqaddam and Kazem Akhavan were kidnapped by a group of Israel-backed gunmen at an inspection post in northern Lebanon.

Iran says the diplomats were abducted by Phalange militiamen and handed over to Israel, but Tel Aviv says they were killed shortly after their abduction by the militant group.

During the talks, Maryam Mojtahed Zadeh, Mousavi’s wife, thanked Berri for his tireless efforts to help shed light on the fate of the missing Iranians and said “I say once again that the abduction operation took place on Lebanese soil and in front of the eyes of the embassy agency in Lebanon.”

“This situation holds the brotherly [Lebanese] government… responsible to follow up on this case more now than in the past in a serious manner so that we could reach the desired result,” she added.

She highlighted friendly and cordial relations between Iranian and Lebanese nations, saying the four missing diplomats chose to stay in Lebanon back then despite the Israeli war.

“Because of the Israeli invasion, many foreign diplomats left Lebanon during that time, but because of the emotional and friendly relations linking Iran with Lebanon, these Iranian diplomats stayed on Lebanese soil… This proves that the Islamic Republic of Iran stands by its brothers and friends for good times and bad times alike,” she added.

Elsewhere in the meeting, the Iranian ambassador said that the liberation of abducted diplomats is a national demand, calling for closer Iran-Lebanon cooperation in pursuing the case.

On July 3, Iran’s Foreign Ministry said in a statement  that it has evidence indicating the four diplomats are “still alive and imprisoned in Israel.”

It also called on the United Nations, the International Committee of the Red Cross (ICRC) and other human rights bodies to fulfill their duties and put pressure on Israel to release the four.

Tehran had previously called on the UN to establish a fact-finding committee to pursue the fate of the abducted diplomats.