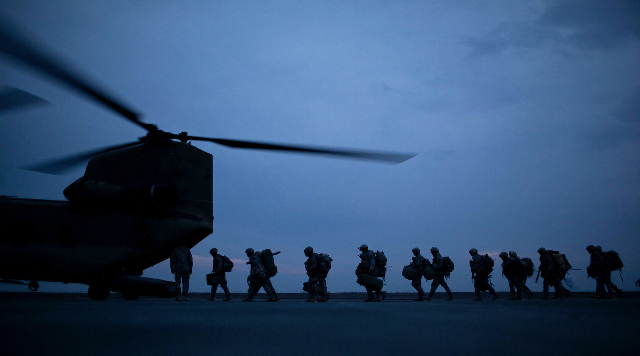 Leaked notes from a White House Situation Room meeting the day before Kabul fell shed new light on just how unprepared the US administration was to evacuate Afghan nationals who'd helped Washington in its 20-year war.

Outsiders were frustrated and suspicious the administration was having plenty of meetings but was stuck in bureaucratic inertia and lacked urgency until the last minute.

While the word “immediately” peppers the document, it’s clear officials were still scrambling to finalize their plans — on the afternoon of Aug. 14.

For example, they’d just decided they needed to notify local Afghan staff “to begin to register their interest in relocation to the United States,” the document says.

And they were still determining which countries could serve as transit points for evacuees.

President Biden was determined to end the country’s involvement in its longest war, and last April he announced his plans to withdraw all U.S. forces from Afghanistan by Sept. 11, 2021.

President Donald Trump had previously cut a deal for a U.S. withdrawal by May 2021.

Biden’s approval ratings still haven’t recovered from the chaotic scenes of those final moments, with Afghans falling to their death from military transports and a suicide blast that killed 13 U.S. service members and scores of Afghans outside the gates of Hamid Karzai airport.

The Atlantic reported this week that thousands of vulnerable Afghans remain stuck in bureaucratic hell, terrified the Taliban they fought for years will hunt them down.

Later this month, Congress will name members to a bipartisan, 12-person commission that will study the war and issue a report similar to the 9/11 Commission.

Axios obtained the NSC’s “summary of conclusions” for a meeting of the so-called Deputies Small Group.

It assembles top aides to various Cabinet members, and usually lays the groundwork for Deputies’ or Principals’ sessions, or works out practical details for executing decisions already made by their bosses.

The document regarded “Relocations out of Afghanistan,” and the meeting was held from 3:30-4:30pm on the afternoon of Aug. 14, Washington time.

At that moment, Taliban fighters were descending upon Kabul.

The meeting was chaired by National Security Council official Liz Sherwood-Randall and included senior officials across multiple agencies, including Gen. John Hyten, vice chairman of the Joint Chiefs of Staff.

The meeting notes highlight how many crucial actions the Biden administration was deciding at the last minute — just hours before Kabul would fall and former Afghan President Ashraf Ghani would flee his palace in a helicopter.

“State will work to identify as many countries as possible to serve as transit points. Transit points need to be able to accommodate U.S. citizens, Afghan nationals, third country nationals, and other evacuees. (Action: State, immediately)”

“Embassy Kabul will notify LES [locally employed staff] to begin to register their interest in relocation to the United States and begin to prepare immediately for departure… (Action: Embassy Kabul, immediately)”

“While we’re not going to comment on leaked internal documents, cherry-picked notes from one meeting do not reflect the months of work that were already underway,” NSC spokesperson Emily Horne told Axios.

“Earlier that summer, we launched Operation Allies Refuge and had worked with Congress to pass legislation that gave us greater flexibility to quickly relocate Afghan partners,” Horne stated.

Horne added, “It was because of this type of planning and other efforts that we were able to facilitate the evacuation of more than 120,000 Americans, legal permanent residents, vulnerable Afghans and other partners.”

By the time the Saturday afternoon meeting happened, senior Biden officials across the government had been meeting around the clock to deal with the high-speed unraveling of Afghanistan.

The administration had taken some measures that would help them ultimately evacuate more than 120,000 people out of Kabul airport by Aug. 31 — the president’s revised withdrawal deadline.

Amid chaos and death, the effort to remove both U.S. citizens and cooperative Afghan nationals was executed in partnership with allies and many desperate improvised efforts from the private sector and veterans groups.

Troops were pre-positioned in the region so they could get quickly to Kabul airport to run the evacuation. The administration had accelerated the Special Immigrant Visa [SIV] approvals. And Biden officials had explored with other countries the possibilities of them serving as transit points for evacuees — which ultimately led to a network that hosted tens of thousands of Afghans waiting for processing.

Nonetheless, many of the key decisions hadn’t been made on the eve of Kabul’s fall.

The president himself — and his intelligence community — overestimated the ability of the Afghan military to defend their territory against the Taliban.

And complicating the situation further, Ghani had personally pleaded with Biden not to do mass evacuations of Afghans earlier in the year.

He feared it would signal a loss of faith in his government.

Many outside advisers were sounding the alarm as the Taliban swept through provincial capitals heading into August.

“I kept being told by people in the [White House] the thing they were most concerned about was the optics of a chaotic evacuation,” said Matt Zeller, a former CIA officer who contacted administration officials in February 2021 about protecting Afghans who worked with the Americans.

“They treated us like we were Chicken Little. They didn’t believe the sky was falling,” Matt continued.

“On the 13th of July, we offered to work with them to help evacuate our partners,” Zeller added.

“We all saw this disaster coming before the inevitable occurred. They didn’t get back to us until Aug 15, the day Kabul fell,” Zeller stressed.

Mark Jacobson, deputy NATO representative in Afghanistan during the Barack Obama administration, told Axios, “That so much planning, prioritizing and addressing of key questions had not been completed, even as Kabul was about to fall, underscores the absence of adequate interagency planning.”

“This is especially surprising given the depth of experience on Afghanistan and contingency operations at that table,” he announced.