Leader says US major part of regional problems, not solution 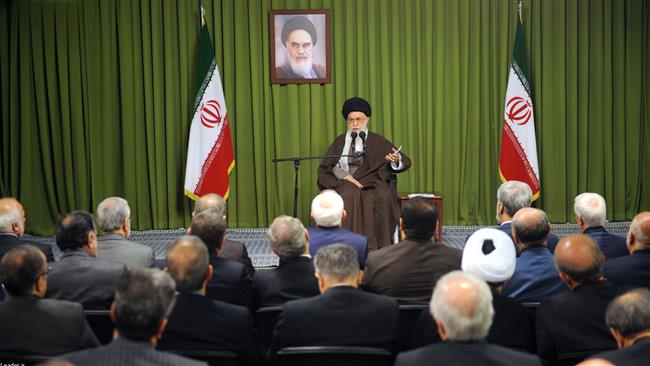 The Supreme Leader has said that Iran’s foreign policy is predicated upon long-term interests, principles and values of the country and will not change with administrations holding different political views.

Supreme Leader of the Islamic Revolution Ayatollah Seyyed Ali Khamenei says the United States is behind a major part of the existing problems in the region, not a solution to them.

The Leader made the remarks in a meeting with Foreign Minister Mohammad Javad Zarif, along with Iran’s ambassadors and heads of diplomatic missions to other countries on Sunday.

Rejecting foreign propaganda about “compulsory or self-imposed” changes in Iran’s foreign policy, Ayatollah Khamenei said such an analysis on the part of the Western countries “stems from the pressure [exerted on them as a result] of this reality that the foreign policy of the Islamic Republic, at least at regional level, has prevented unrivaled jockeying of hegemonic powers, especially America like a strong barrier” and this is why they always aspire these policies to be changed.

The Leader added that Iran’s foreign policy, like all world countries, is predicated upon long-term interests, principles and values of the country and will not change with administrations holding different political views.

Ayatollah Khamenei said the impact of different administrations only goes as far as the tactics and executive initiatives of the country’s foreign policy strategies.

He emphasized that the US objectives in the Middle East are diametrically opposed to those of Iran.

The Supreme Leader further pointed to the four-year crisis in Syria and said that holding elections is the solution to the Arab country’s conflict.

Ayatollah Khamenei stressed that financial and military support for militants must first be terminated to end war and unrest in Syria so that the Syrian people would be able to elect who they wish in a secure and safe atmosphere.

The Leader also said the partitioning of Iraq into Shiite Arab, Sunni Arab and Kurdish regions is completely against its national interests and is an “impractical, meaningless and unacceptable” plan.