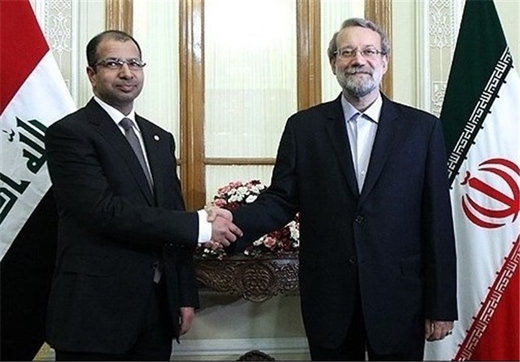 Larijani and Jabouri exchanged views about regional and international issues as well as the latest developments in Iraq.

Iranian Parliament Speaker Ali Larijani and his Iraqi counterpart, Salim al-Jabouri, held talks on a host of issues, including ways to promote bilateral relations between the two neighboring countries.

The meeting in Tehran on Saturday between Larijani and Jabouri also covered regional and international issues as well as the latest developments in war-stricken Iraq.

Iraqi sources said Jabouri would discuss the national reconciliation plan in Iraq and the fight against terrorists in the Arab country in his meetings with Iranian officials.

Iraq has been facing the growing threat of terrorism, mainly posed by the ISIL terrorist group.

The ISIL militants made swift advances in much of northern and western Iraq over the last summer, after capturing large swaths of northern Syria.

However, a combination of concentrated attacks by the Iraqi military and the volunteer forces, who rushed to take arms after top Iraqi cleric Ayatollah Ali al-Sistani issued a fatwa calling for the fight against the militants, have blunted the edge of the ISIL offensive.