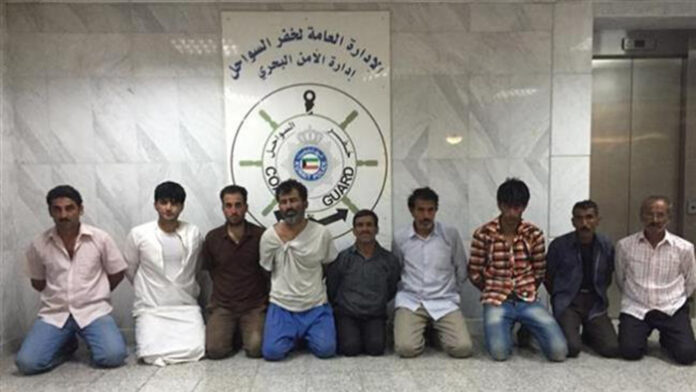 Kuwait’s Interior Ministry announced that the country’s coast guard has arrested 10 Iranians accused of trying to “infiltrate into the country.”

In a statement carried by the state-run Kuwait News Agency (KUNA) on Sunday, August 14, the ministry claimed the Iranians had sought to sneak into the country via the coastal region of Abul-Hasaniyah, Press TV reported.

The ministry added that one Iranian had been injured during the arrest operation and posted a photo online of nine men on their knees with their hands behind their backs.

It said the arrested Iranians had been “referred to relevant legal authorities.”

On Saturday, the commander of Iran’s coast guards base in southern Bushehr province, Lieutenant Colonel Amin Khosravi, described the Iranians as fishermen, saying they “had been arrested due to an altercation that had broken out in Kuwait and not border violation,” Fars News Agency reported.

Kuwait’s court of appeals last month upheld the death sentence for a Kuwaiti citizen called Hasan Abdulhadi Ali who was allegedly convicted of “spying for Iran” as part of a cell accused of trying to destabilize the Persian Gulf country.

On July 21, the court of appeals claimed that Abdulhadi Ali had been a member of the Lebanese resistance movement, Hezbollah, since 1996. He was found guilty of being “the mastermind of the cell” of 26 members, among them an Iranian, who had been accused of plotting “hostile acts” in Kuwait and possessing weapons.

The Iranian had also been sentenced to death by a lower court in January. However, the appeals court did not look into his case on Thursday as he is said to be on the run.

In a statement released last September, the Iranian embassy in Kuwait dismissed the accusations linking Tehran to the terror cell, saying a “systematic” campaign is underway to harm relations between neighbouring states.

The Iranian diplomatic mission further expressed its “deep sorrow over the mentioning of Iran in an internal case in Kuwait that is basically related to the discovery of weapons and ammunition.”

At the time, Iran’s then deputy foreign minister for Arab and African affairs, Hossein Amir-Abdollahian, also dismissed as completely baseless the allegations leveled in Kuwait against the Islamic Republic.