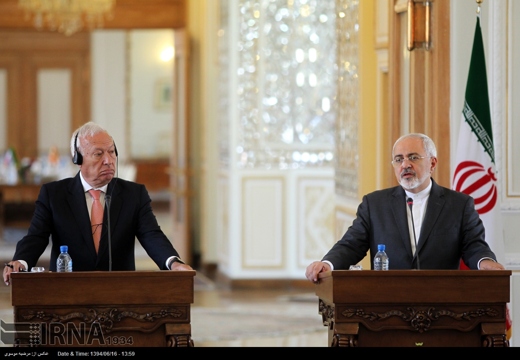 Spain’s top diplomat has said that the Joint Comprehensive Plan of Action can serve as a catalyst for closer international cooperation.

The Spanish foreign minister says the agreement clinched between Iran and P5+1 over the Islamic Republic’s nuclear program has laid the groundwork for closer international cooperation.

On July 14, Iran and P5+1– the United States, Britain, France, China and Russia plus Germany – finalized the text of a nuclear agreement dubbed the Joint Comprehensive Plan of Action (JCPOA) in the Austrian capital, Vienna.

The top visiting Spanish diplomat underlined that the foreign ministries of Iran and Spain are to exchange delegations and sign a memorandum of understanding on mutual cooperation.

Zarif touched upon his meeting earlier in the day with the Spanish foreign minister, and said a whole range of issues were brought up for discussion during the talks. “I had different political and regional discussions with the Spanish foreign minister, and we [also] talked about railroad, transportation and economic infrastructure,” said Zarif in the press briefing.

Among other issues discussed, said the Iranian foreign minister, were human rights and refugees’ rights as well as the situation in Iraq, Syria and Afghanistan plus the Yemen crisis. He said they also discussed regional threats which, as Zarif added, have resulted in security threats and the recent refugee crisis.

Zarif then touched upon the Syrian conflict, saying the crisis can be settled only through political means. He further said it is only up to the Syrians to decide on the country’s head of state. “Only Syrian people have the right to make decisions about the Syrian president, and those who have set conditions for the Syrian president over the past two or three years have perpetuated the war in Syria,” the top Iranian diplomat underscored.

“These countries are to blame for all the bloodshed in Syria because they made the decision that Syrian people should have made, and they intended to impose their decision on the Syrian people from outside,” said Zarif.

He urged all foreign governments which have hampered the establishment of peace in Syria to “stop their actions and not to pursue their short-term interests at the expense of Syrian people.”

“They should allow Syrian people to return to stability, so that the crisis of war refugees will end,” Zarif said.

The foreign-sponsored conflict in Syria, which started in March 2011, has reportedly claimed more than 240,000 lives up until now. According to the United Nations, the militant groups in Syria have forcefully displaced 7.6 million Syrians internally, and compelled some 4.6 million others to take refuge mostly in neighboring countries.