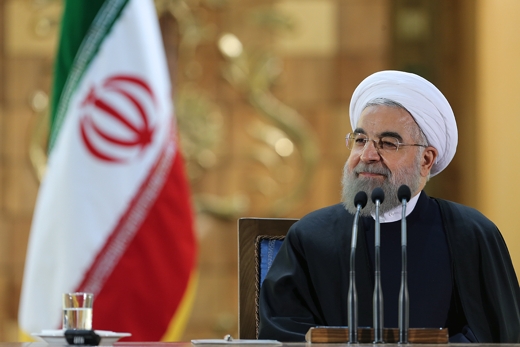 Iran’s President Hassan Rouhani has hailed the implementation of the nuclear agreement between the country and the P5+1 group of countries, dubbed the Joint Comprehensive Plan of Action (JCPOA), as a political victory for the Iranians.

“Today is the day of the victory of the people of Iran on the political arena,” Rouhani said in a televised address on Sunday, adding, “As of today, it is clear that our country has a big power called the power of diplomacy.”

“Many did not believe in this power,” he added. “They did not believe that our politicians and diplomats are able to sit at negotiating table with the most adept negotiators from world powers and conduct negotiations and defend the rights of their nation and their country.”

Iran and the five permanent members of the UN Security Council – Britain, China, France, Russia and the United States – plus Germany finalized the JCPOA in Vienna on July 14, 2015.

“Today is a historic day and an exceptional one in the political and economic history of the people of Iran,” said Rouhani.

“After 12 years of steadfastness and resistance as well as patience and sacrifice and also martyrdom of a number of nuclear [scientists] and on the back of indefatigable efforts of our nuclear scientists, diplomats, politicians, lawyers as well as the economic officials of the country, today, we are at a turning point,” he added.

The president noted that the JCPOA implementation proved that “we can interact with the world in the interest of our nation” without harming others’ interests.

“The people of Iran proved that constructive interaction is the true and right way,” he said.

“From today on, Iran’s nuclear program will not, under false pretexts, be considered as a threat to peace and security for the world and the region,” Rouhani said, adding, “Now the nuclear program is being regarded as a plan for scientific, technological, business, and economic interaction and cooperation.”

“Iran’s nuclear program will be a means of new technology on the path of progress of the nation and stability and regional security.”

Rouhani also said in the light of the new development, Iran expects its economy to grow by as much as five percent in the next year. The president said, however, that the countryneeds to see an eight-percent economic growth rate.

To that end, he added, Iran needs “cutting-edge technologies” and “foreign investment.”

“Today, it has turned out that the win-win policy is an accurate one. For those, who thought that either you need to cheat others or you will be cheated, it turned out that it is possible to speak to the world, to have dialog with the world and to reach an agreement that could be in the interests of the peoples of the region and the world,” said the Iranian chief executive, adding that the nuclear deal can be used as a model to resolve regional issues.

Rouhani stressed, “We would not taste the sweet taste of this great victory without the instructions and guidelines of the great Leader of the Islamic Revolution [Ayatollah Seyyed Ali Khamenei] and without the protection provided for this people by the religious jurisprudence.”

“I hope that the new rulers in Saudi Arabia have already learnt the lesson and reconsider their behavior in the interest of the region and their own people,” he said, adding that the kingdom itself is the source of its problems with Iran.

The president, however, added, “Our administration, our people will not accept undiplomatic behavior and if necessary, we will give a firm response to certain behaviors.”

Rouhani said Saudi Arabia has “started a wrong path”, adding: “We hope that it would not continue.”

“Regarding the Mina incident, the reaction of Saudi Arabia and its approaches did not fall within moral and diplomatic norms,” saying Riyadh did not offer an apology to the nations, which had lost their people in the disaster.

Two large masses of pilgrims converged at a crossroads in Mina, near the holy Saudi city of Mecca, during Hajj rituals on September 24, causing a human crush. Saudi Arabia claims nearly 770 people were killed in the incident, but Iranian officials say about 4,700 people, over 460 of which were Iranians, lost their lives in the tragedy.

Riyadh’s behavior toward the people of the region “is not the right one,” Rouhani also noted, citing the kingdom’s continuing massacre of Yemenis in a military aggression it launched against the impoverished nation last March.

“Saudi Arabia started on the wrong path on its own. We hope it will not continue treading on that path…I hope that the new rulers in Saudi Arabia have already learnt the lesson and reconsider their behavior in the interest of the region and their own people.”