JCPOA Endorsed by UNSC, Not to Change: EU’s Mogherini 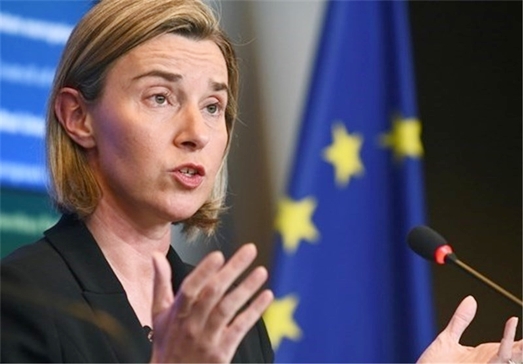 The European Union’s top diplomat said the nuclear deal between Tehran and world powers has been reflected in a UN Security Council resolution and cannot be dismissed by one government, stressing that it is incumbent upon the EU to make sure the accord is fully implemented.

“And on Iran, let me tell you very clearly that this is not a bilateral agreement, it is a multilateral agreement, endorsed by the UN Security Council resolution. So it is in our European interest, but also in the UN interest and duty to guarantee that the agreement is implemented in full. For the whole duration of the agreement, which is 10 years,” Mogherini said on Sunday evening at an informal meeting of the European Union’s foreign ministers in Brussels, the official website of the EU reported on Monday.

The ministers discussed a wide range of issue, including the change of US foreign policy under President-elect Donald Trump.

“I have personally a specific role to guarantee that this (the JCPOA) is done by all sides, and for sure this is in European interest. So we will take that as one of the keys elements that will not change,” she added.

Iran and the Group 5+1 (Russia, China, the US, Britain, France and Germany), reached the comprehensive nuclear deal, known as the Joint Comprehensive Plan of Action (JCPOA), in July 2015 and it was implemented in January 2016.

In a speech to the pro-Israeli lobby group AIPAC (American Israel Public Affairs Committee) in March, Trump declared that his “number-one priority” would be to “dismantle the disastrous deal with Iran.”