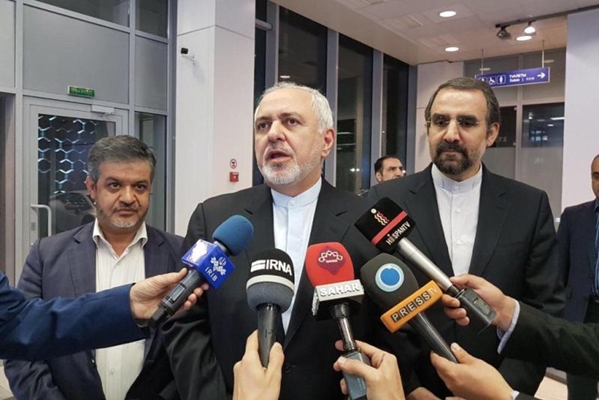 Iran's Foreign Minister Mohammad Javad Zarif says it is time the world kept its side of the bargain and delivered on its commitments as per the Iran nuclear deal.

Zarif made comment while talking to reporters in the Russian capital, Moscow.

“Iran has shown the whole world that it has remained committed to its obligations, and now it is the world’s turn to live up to its commitments with regards to Iran,” said the top diplomat.

“I am confident that Russia will take the lead in this regard,” he said, shortly before his meeting with Russian Foreign Minister Sergei Lavrov.

He said Iran is a patient nation, but will resist in order to secure its rights.

“Over the past year, the Islamic Republic of Iran has shown strategic patience in the face of US efforts to scuttle the JCPOA, proving that it has always remained committed to its international obligations,” he added.

Zarif underlined the last measure adopted by the United States on May 4, 2019 made it impossible to implement the JCPOA.

“Through pressure and threats and bullying, the US tried to stop nuclear activities carried out within the framework of the JCPOA”, the top diplomat noted.

“One of these activities was the transfer of Iran’s heavy water and enriched uranium, and today the Islamic Republic of Iran has decided to adopt some measures authorized by the JCPOA in response to the US move and the inaction of the European countries which have stayed in the JCPOA,” he said.

Zarif noted Iran’s measure gives the remaining parties to the JCPOA 60 days to ensure the country’s rights under the nuclear deal, making it possible for Iran to snap back to all of its commitments under the agreement.

“Iran’s move is not outside the JCPOA, nor does it mean withdrawal from the JCPOA. Rather, our measure runs counter to the US action, i.e., the violation of the JCPOA and [UN Security Council] resolution 2231,” he said.

Zarif then touched upon President Rouhani’s letters to the five countries which are parties to the JCPOA.

“Although the letters we wrote for heads of state of the 4+1 countries are legally the same, our viewpoints toward different members of the 4+1 group are not the same,” the foreign minister said.

“We will never regard partners who stood by Iran in tough times in the same way as others,” he said.

“We are a nation of dialogue and our history is one of dialogue,” said the top diplomat.

Zarif said the remaining parties to the JCPOA have, so far, adopted good stances, and now they should be prepared, too, to take action to preserve an important diplomatic accomplishment.

“Iran does not want anything more than its rights under the JCPOA,” he said.

Zarif reiterated whenever they make good on their obligations, Iran will snap back to all of its commitments under the JCPOA.

He said Iran will remain committed to the JCPOA to the same extent that they fulfill their commitments.

His comments came hours after Tehran scaled down its obligations under the Iran nuclear deal following Washington’s illegal withdrawal from the deal and the Europeans’ failure to secure the country’s interests under the agreement.

Iranian President Hassan Rouhani announced on Wednesday that Iran would stop two of its commitments under the Iran nuclear deal known as the Joint Comprehensive Plan of Action (JCPOA).

“To put it simply, those two actions are [to stop] two sales. Whenever our enriched materials reached 300 kilograms, we would sell the surplus to that amount to another country and get yellow-cake in return. The second sale pertains to heavy water. Whenever our heavy water reserves exceeded 130 tonnes, we would sell the surplus to other country. And today we are stopping those sales,” he said.

“Under the JCPOA, Iran has undertaken to stop its enrichment level at 3.67 [percent purity]; we would stop that,” he said.