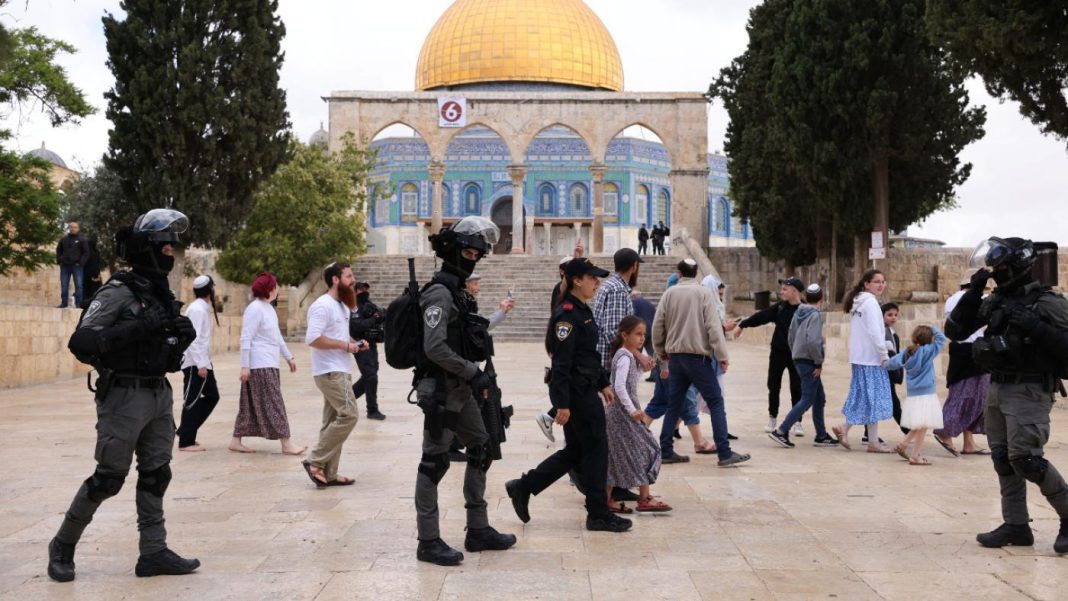 The settlers entered through the Moroccan Gate on the western side of the site, which the Israeli authorities have controlled since the beginning of the occupation of East Jerusalem and the West Bank in 1967.

Once inside, the settlers performed prayers and raised the Israeli flag at the Qattanin Gate, as they marked Israel’s Memorial Day, the Palestinian news agency Wafa reported.

The news agency added large numbers of Muslim worshippers were prevented from entering al-Aqsa Mosque at dawn and that some of them had been beaten by Israeli security forces.

Hamas and Islamic Jihad accused police of disconnecting the muezzin’s speakers at the mosque on Tuesday night so as not to interfere with Israel’s Memorial Day opening ceremony at the adjacent Western Wall plaza. Israeli police denied the claim, describing it as “fake news”.

Israel’s Haaretz newspaper reported Mukhtar Jumaa, Egypt’s endowments minister, as saying: “The waving of Israeli flags and the singing of the Israeli anthem in the al-Aqsa Mosque are a blatant aggression on the mosque and a dangerous provocation in the feelings of Muslims all over the world.

“It serves the extremists and harms international peace and the discourse between religions and cultures,” he added.

Palestinians have been outraged by repeated intrusions by Israeli settlers to pray at the site. By long-standing convention, non-Muslim tourists are allowed to visit under certain conditions and the approval of the Waqf, an Islamic trust that manages the mosque’s affairs, but only Muslims are allowed to pray there.

Several Palestinian and Arab organisations had warned against allowing settlers to enter al-Aqsa Mosque on Thursday, after a 12-day period in which the government had barred them from entering the compound during the final days of Ramadan.

However, on Wednesday, Israeli police confirmed that Al-Aqsa Mosque would be opened to settlers on Thursday from 7am to 11am and from 1.30pm to 2.30pm.

Jordanian Minister of Awqaf Islamic Affairs and Holy Places Mohammad Khalaileh stated on Thursday that allowing settlers to enter the site was “a provocation against Muslim worshippers” that will only “escalate the tensions and drag the area into clashes and wars”.