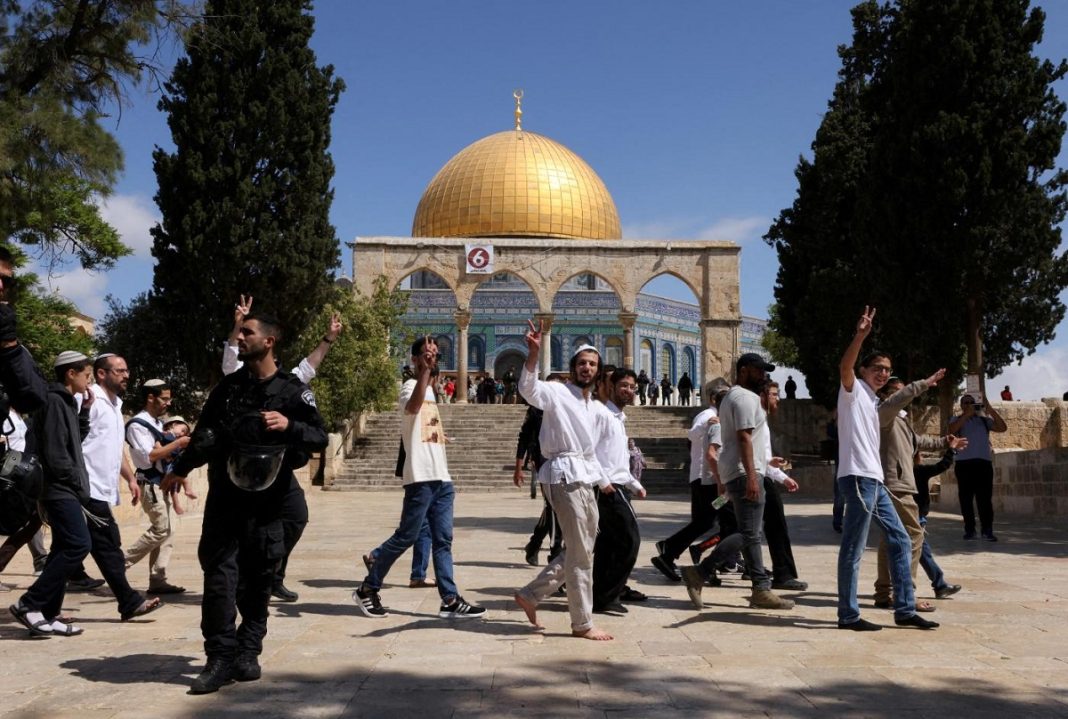 Dozens of Israeli settlers, escorted by military forces, stormed the al-Aqsa Mosque compound in the occupied Old City of al-Quds on Sunday morning.

The Israeli settlers entered the compound through the Moroccan Gate on Sunday morning, according to the Arabic-language Arab48 news website.

In the meantime, Israeli troops were stationed at the main praying building of al-Aqsa Mosque, which sits on the southern side of the complex, besieging Palestinian worshipers inside the scared site.

The settlers then performed Talmudic rituals at the site, which is venerated by Jews, Christians and Muslims.

The development comes as thousands of extremist Jewish Israeli settlers are due to hold a far-right march through Muslim areas of the holy city amid Palestinian warnings it could trigger serious confrontations.

The raid prompted a group of young Palestinians to throw lit Molotov cocktails at the Israeli troops, who, in return, fired stun grenades and live bullets to disperse the crowd.

The Palestinian al-Quds TV satellite channel also said an improvised explosive device struck a checkpoint in the village of al-Jalma, which lies north of the northern occupied West Bank city of Jenin.

According to Shehab news agency, extremist Jewish settlers once again attacked the homes of local Palestinians in al-Huwara neighborhood of northern al-Quds.

The Palestine Red Crescent Society stated that 30 Palestinians were injured during clashes with Israeli settlers in Huwara neighborhood as well as Kafr Qaddum town, located 13 kilometers (8 miles) west of Nablus.

Local sources, speaking on condition of anonymity, said clashes also broke out between young Palestinian men and Israeli forces at the entrance to Jamain area south of Nablus.

Around 20 Palestinians were arrested in al-Quds between Wednesday and Thursday, and another 80 inside the Israeli-occupied territories.

The so-called Flag March, which attracts hundreds of Jewish settlers and far-right extremists, celebrates the Israeli regime’s capture of East al-Quds in the 1967 war.

Meanwhile, Israeli officials are expected to allow extremist lawmaker Itamar Ben-Gvir to visit the al-Aqsa Mosque on Sunday amid soaring tensions around the contentious Flag March.

Earlier this week, Ben-Gvir had informed the Knesset of his plan.

On Saturday evening, a group of young Israeli settlers held a rehearsal of the march, walking together through Hagai Street in the Muslim Quarter of the Old City of al-Quds, waving Israeli flags and chanting slogans, as police escorted them.

Ismail Haniyeh, head of the political bureau of Hamas, warned the Palestinian resistance movement is ready to face any possible scenario as tensions are high in the occupied al-Quds ahead of the far-right and provocative Flag March.

“All options are on the table, and we are ready for all scenarios. We are dealing with the Israeli occupation, which has existed for so long and has now reached its end,” he said in a statement issued on Saturday evening.

“The occupying Israeli regime wants to use (the so-called) Flag March as part of attempts aimed at undermining the achievements of Operation al-Quds Sword, and cracking down on the status quo that followed the battle,” he added.

“We have many options to confront the Flag March and attempts meant to desecrate the al-Aqsa Mosque compound,” Haniyeh pointed out.

The head of the political bureau of Islamic Jihad movement, Mohammed al-Hindi, also stated Palestinians will spare no effort to confront the Israeli occupation’s plans, underscoring that all possibilities are on the table.

Hindi told Lebanon’s Arabic-language al-Mayadeen channel in an interview that Israeli authorities have mistakenly underestimated the capabilities of Palestinian resistance movements, and are currently suffering from the repercussions of Operation al-Quds Sword.

He pointed out that the issue of Palestine is not simply confined to Palestinians and Arabs, but rather a global matter that has been raised at international forums.

Hindi noted that Israel serves as the arm of the United States and the West in the Middle East, and that Washington seeks to subjugate and dominate the entire region.