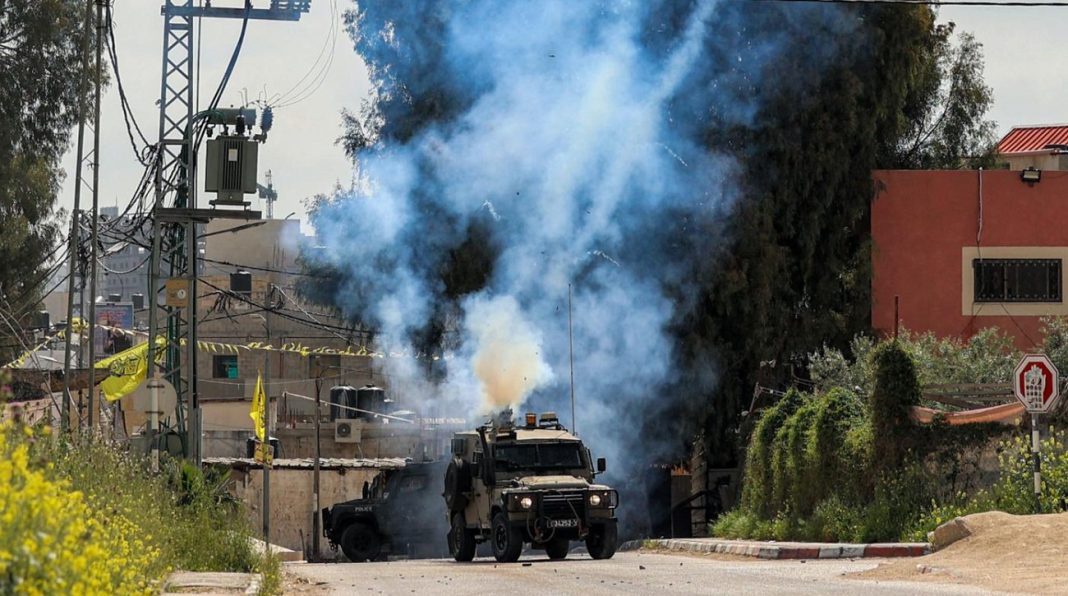 Israeli troops have killed a young Palestinian in the West Bank refugee camp of Jenin who they blame for the recent killing of Israeli soldiers in Tel Aviv, Palestinian authorities announced Saturday.

The Palestine Health Ministry reported on Saturday that one Palestinian was martyred and 13 were wounded during clashes between local residents in Jenin and the armed forces of the occupying regime.

The Hamas official further added that Tel Aviv’s “military aggressions against out people in Jenin should generate a massive intifada (uprising) against the Zionist occupiers across the West Bank.”

He also vowed that “West Bank’s cities, refugee camps and streets will turn into flames that would burn the feet of the occupying aggressors.”

The Israeli military, meanwhile, told news outlets that its assault against the Palestinian refugee camp in the northern West Bank city of Jenin was ongoing.

The Palestinian health ministry further announced that five other Palestinians were wounded in Jenin by gunfire from the Israeli regime forces.

Saturday’s raid comes a day after the occupying regime announced the killing of the 28-year-old Palestinian, identified as Raad Hazem, blaming him for the shooting death of three Israeli occupiers on Thursday and wounding more than a dozen others at a popular Israeli nightlife district in Tel Aviv.

After the deadly Tel Aviv attack, hawkish Israeli Prime Minister Naftali Bennett said he had given “full freedom” to the regime’s suppressive armed forces to contain a surge in violence since March 22.

“There are not and will not be limits for this war,” Bennett boasted on Friday, speaking hours after the Palestinian resistance fighter opened fire on a street of crowded Israeli bars and restaurants.

“We are granting full freedom of action to the army, the Shin Bet (the regime’s infamous domestic police agency) and all security forces in order to defeat the terror,” he added.

A total of 14 people have been killed in attacks across the Israeli-occupied territories since March 22. Over the same period, at least 10 Palestinians have been martyred, including the resistance fighters that carried out the attacks.

Palestinian Hamas and the Islamic Jihad resistance factions praised the Tel Aviv attack against the Israeli occupiers but did not claim responsibility for them.

Thursday’s attack came amid heightened tensions during the Muslim holy month of Ramadan.

Jenin has been a flashpoint through the long-running clashes between the Israeli regime’s military and local Palestinians.

Earlier this month, the Israeli forces killed three Islamic Jihad fighters when they came under fire during an operation to arrest them in Jenin.

The raid, in which four Israeli soldiers were wounded, followed another deadly attack on March 29 in Bnei Brak, an Orthodox Jewish city near Tel Aviv.

In that attack, a Palestinian resistance fighter with an assault rifle killed two Israeli occupiers, two native Ukrainian residents and a police officer.