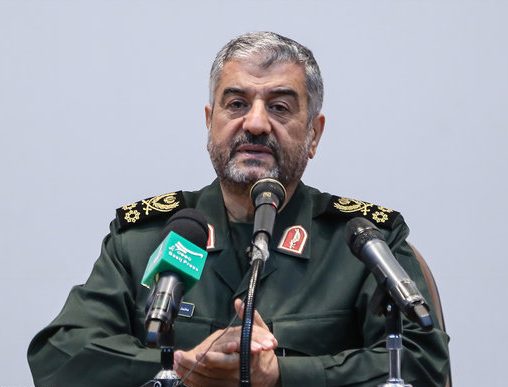 Major General Mohammad Ali Jafari, the commander of the Islamic Revolution Guards Corps (IRGC), says the military organization seeks to promote peace in the Middle East, but peace can’t be secured only through negotiation.

“I declare it with a loud voice that like other organizations of the Islamic Republic, the IRGC is after peace. We are not seeking war, but peace cannot be secured only through negotiations,” General Jafari said in a Tuesday ceremony in Tehran.

General Jafari stressed that the IRGC does not reject interaction and negotiation, but we should not put our trust in the enemies and not follow them blindly.

The Iranian commander went on saying that some officials claim that the IRGC is totally against interaction with the outside world and seeks war.

“I declare with a loud voice that the IRGC is after peace but a permanent peace can be achieved only if the enemies are afraid of us and remain concerned with the consequences of their animosity towards us.”

“Peace cannot be achieved only through negotiations. This is completely clear for anyone with the slightest knowledge of the global dominance system,” he added.

The Iranian top commander also referred to Riyadh’s atrocities in the region, saying that today Saudi Arabia is turning into a terrorist state in the region.

He advised regional states not to try to turn into a leading power because “they usually end up in bringing disgrace on themselves and putting other states in trouble.”

He also referred to the extension of his term as the IRGC commander for three more years, and added, ”I’ll double my efforts to serve the Islamic Revolution and Establishment.”

“The IRGC has no hesitation in preserving the Islamic Revolution and achieving its goals. Without the support of Jihadi [hard-working] and revolutionary managers at different levels of the IRGC, achieving such goals will be impossible,” he said.