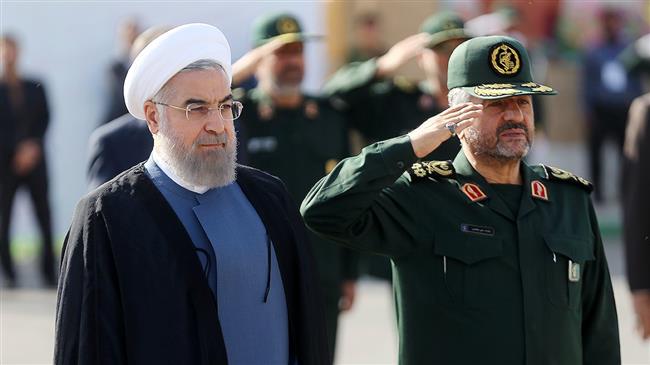 Iran's Islamic Revolution Guards Corps (IRGC) says it stands ready to put in action President Hassan Rouhani's latest position that if Tehran were not able to export its crude oil through the Strait of Hormuz, no other country would be able to do so.

The IRGC commander’s remarks came after President Rouhani delivered a stern warning to the US during his recent European tour against any attempt to block Iranian oil exports in the light of its withdrawal in May from the 2015 nuclear deal.

Speaking at a joint press conference with his Swiss counterpart, Alain Berset, in the Swiss capital, Bern, on Tuesday, Rouhani said the US would never be able to carry out such a threat.

Rouhani said it was “incorrect and unwise” to think that “one day all oil producing countries would export their surplus oil and Iran would be the only country that cannot export its oil.”

On Thursday, IRGC Commander Major General Mohammad Ali Jafari hailed the Iranian president’s “decisive” stance against Washington’s threats, expressing hope that the president’s warning would be put into action “if the need arises” and in case the entire Iranian nation and authorities see eye to eye on such an action.

“Definitely, through the  implementation of the latest positions adopted by the country’s executive officials, under contingencies the enemies can be made understand…what the meaning of ‘either all or none can use Hormuz Strait, is'” Jafari emphasized.

The Strait of Hormuz, which sits at the mouth of the Persian Gulf, provides the only maritime passage from the Persian Gulf to the open ocean and is one of the world’s most strategically important choke points.

Through the strategic waterway, a large share of the world’s oil shipments pass. The strait also serves as a key maritime route for shipments of liquefied natural gas.

For countries that import oil or gas, including the US, normal operation of Hormuz is vital.

Rouhani’s warning prompted a reaction from the Pentagon, which pledged to keep the critical waterway open.

Captain Bill Urban, a spokesman for the US military’s Central Command, was quoted by Reuters as saying on Thursday that the American naval forces and their regional allies are prepared to “ensure the freedom of navigation and the free flow of commerce wherever international law allows.”

“The US and its partners provide, and promote security and stability in the region,” he added.

In May, President Donald Trump announced that Washington was leaving the 2015 multilateral nuclear deal, under which sanctions against Iran — particularly its energy sector — were lifted.

Besides the blow it dealt to the landmark nuclear agreement, Washington has been seeking to throw a wrench into efforts by the remaining parties to the deal to save the international pact, which has been endorsed by UN Security Council Resolution 2231.

Washington says it has told countries around the world that they would be hit with financial penalties should they fail to cut their oil imports from Iran to zero when the American bans against Tehran fully come into force on November 4.

State Department Director of Policy Planning Brian Hook said Monday that he planned to meet with European allies Britain, France and Germany at the end of the week to discuss Iran. He also said he and senior Treasury Department officials would visit Persian Gulf states “in the coming days.”

Washington’s goal, he said, is putting pressure on Iran “by reducing to zero its revenue on crude oil sales.”