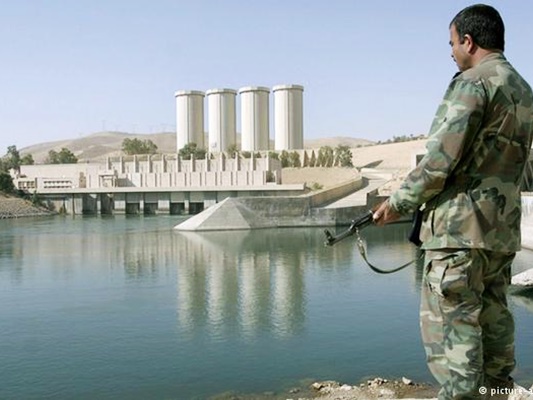 An IRGC general highlighted the non-military capabilities of the Islamic Revolution Guards Corps, saying that the IRGC’s Khatam al-Anbiya Construction Base is now repairing the strategic dam of Mosul, northern Iraq.

According to a report by IFP, General Salar Abnoush, a deputy commander of IRGC’s Khatam al-Anbiya Construction Base, hailed the scientific potentials of the Islamic Iran, saying the forces of Khatam al-Anbiya Base are now busy serving in all industries.

“For instance, we are busy with several giant projects in the water domain, a strategic area as it is, so as to face less crises in the future… you will be hearing of such a big achievement in the future.”

He asserted, “We have reached the point that your children are today busy filling up the gap and repairing cracks in Mosul dam to prevent full inundation of the Iraqi cities of Samarra, Mosul and Kadhimiya.”

“This is while, all major dam building experts worldwide are unanimously admitting that the engineers of Khatam al-Anbiya are the only ones who have the solution in their hands,” he went on to say.

While referring to the victory of the resistance front in Aleppo, Abnoush said, “Those who used to ask why our youth should fight in Syria and Syria is not of our business, should know that in the beginning days of the Iraqi imposed war on Iran, Iranian forces were not even equipped with ordinary weaponry and that it was Hafiz al-Assad [the then Syrian president] who provided us with arms.”

According to a Farsi report by Mizan, General Abnoush further said Iran has not been the initiator of any war ever.

“We have announced times and again that we are seeking peace and will not wage any wars by no means, but in case a war breaks out, they, those who have begun it, will not be the ones who will end it; we will… by our own equations!”

“Enemies have well understood our power and due to the same reason they wish to weaken us,” he noted.