The Commander of the Quds Force of Iran’s Islamic Revolution Guards Corps (IRGC) made the remarks in Tehran on Wednesday during a ceremony marking the first anniversary of the killing of Brigadier General Hossein Hamedani (seen below) by terrorists in Syria. 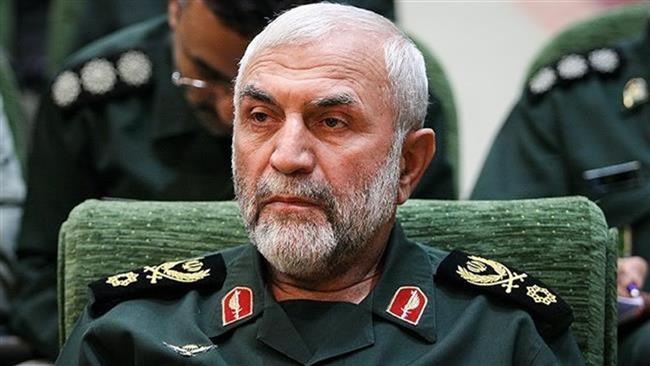 The senior IRGC commander was killed by ISIS last year during an advisory mission on the outskirts of the Syrian city of Aleppo.

“ISIS and Takfiri terrorist groups were not created for war with Syria, they were established to target the Islamic Republic of Iran,” Soleimani said.

He stressed that Iran’s advisory forces in Syria are not only defending the Arab country, but also Iran and the whole Muslim world.

“The Syrian government, with the help of Iran, has been able to withstand pressure and besiegement for five years, so that the world could admit that these groups [fighting the government] are terrorists,” he added.

Soleimani noted that if it were not for Iran’s help and Syria’s resistance, the whole region would have been plagued with the Takfiri scourge.

“Today the Takfiris have been defeated… on all fronts,” the IRGC commander said, adding, “I believe that the Syrian people are invincible if they support their government,” he added.

He also stressed that “the EU is paying a heavy security price for supporting terrorist groups” in the Middle East.

Syria has been gripped by foreign-backed militancy since March 2011, which has claimed the lives of some 400,000 people.