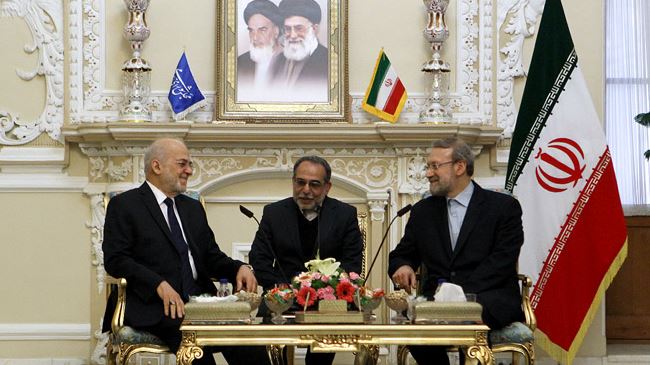 Iraq’s Foreign Minister Ibrahim al-Jaafari described Iran as a powerful country in the region and across the world which has a special position in Iraq’s foreign policy.

Iran’s Parliament (Majlis) Speaker Ali Larijani says political and ethnic groups in Iraq should strengthen their unity in the current “very sensitive” situation in the country.

Larijani, who was speaking during a meeting with Iraq’s Foreign Minister Ibrahim al-Jaafari in Tehran on Monday, also said that Iran is prepared to transfer its experience to the new Iraqi government and help it settle domestic problems.

The Iranian Majlis speaker further criticized the US and its allies for not being serious in their fight against the ISIL terrorist group. He referred to the remarks by US statesmen that the fight on the terrorists in Iraq would take years and said such comments indicate how the Americans have hidden plots.

Iraq is facing a terrorist campaign by Takfiri ISIL militants, who currently control swaths of territory across the country as well as in Syria. They have been committing heinous crimes in the captured areas, including mass executions and beheading of local residents as well as foreign nationals.

A US-led coalition has been conducting airstrikes against ISIL inside Iraq since August.

This is while many of the countries in the US-led bombing coalition, such as Saudi Arabia and Qatar, have been the staunch supporters of the Takfiri ISIL elements in the region.

During the meeting with Larijani, the Iraqi foreign minister, for his part, said Iran, as a powerful country in the region and across the world, has a special position in Iraq’s foreign policy.

He added that the exchange of visits between Iranian and Iraqi officials would improve mutual relations and called for Iran’s participation in the reconstruction of war-stricken Iraq.

Jaafari arrived in Iran on Sunday at the head of a delegation to attend a two-day international conference on the World Against Extremism and Violence (WAVE) in Tehran, scheduled to open on Tuesday in the presence of envoys from 40 countries.