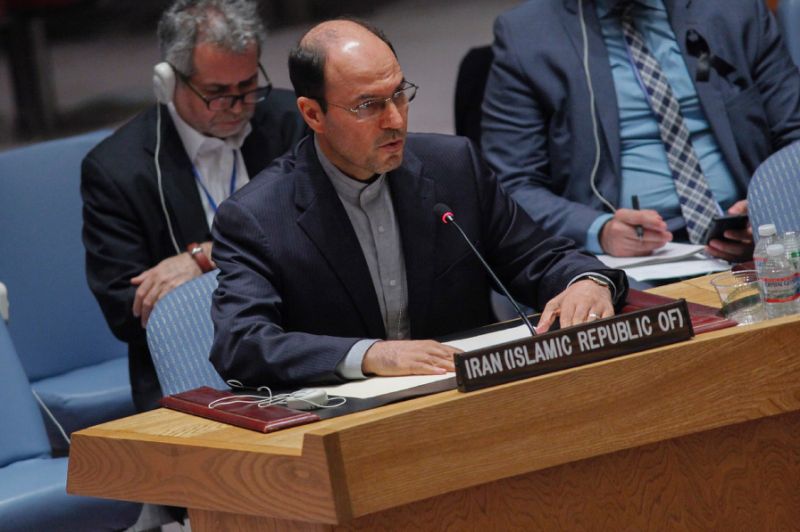 Iran’s Ambassador and Charge d’Affaires to the United Nations, Gholamhossein Dehghani warned against the appearance of different terrorist groups derived from or affiliated to Daesh [ISIS] in Afghanistan. In his June 21 remarks, he noted that turning a blind eye towards the issue would lead to further deterioration of the situation there.

The full text of the statement reads as follows:

I would like to express my appreciation to France for organizing this debate on the situation in Afghanistan. My thanks also go to the distinguished Ambassador of Afghanistan for his statement, as well as Mr. Nicholas Haysom, for his briefing and presenting the SG’s latest Report. We wish him all the best in his new assignment and wish to welcome Mr. Yamamoto as the new Special Representative of the Secretary-General for Afghanistan and head of the United Nations Assistance Mission in Afghanistan (UNAMA).

My Government is concerned over the volatile situation in Afghanistan, which continues to face major security, economic and political challenges. The SG’s report refers to “continued and intense armed clashes, at their highest number recorded since 2001”, as the lead factor in further deteriorating the situation in the country.

Uncertainty over the prospect for direct talks between the Government and the Taliban is distressing as well. We condemn all violent attacks committed by the Taliban and all other terrorist groups, as well as any cooperation with them, since we believe this will encourage them in their odious behaviour and is thus counterproductive to establishing peace in Afghanistan. At the same time, Iran reiterates its support for any Afghan-led peace process.

At the same time, the emergence of Daesh and its offshoots, the so-called Islamic State of Iraq and the Levant-Khorasan Province (ISIL KP), along with a spectrum of other terrorist and extremist groups, such as the Islamic Movement of Uzbekistan in north and the Islamic Movement of Eastern Turkistan are all alarming signals for more trouble in the future, if we fail to properly address them now.

Today, the Afghan National Unity Government is in the forefront of fighting terrorism. The sustained support of the international community is much more needed to shore up the Afghan Government in its fight against terrorism and extremism as well as to address the security, economic and political challenges that it faces.

During the past decade, Iran has helped Afghanistan with the completion of almost 300 projects, ranging from infrastructure to training and capacity building in human resources, especially through offering hundreds of scholarships each year.

On 23 May, the Presidents of Afghanistan and Iran and the Prime Minister of India signed the trilateral transport and transit agreement in Tehran to facilitate trade among the three countries and potentially Central Asia. This agreement covers the development of the Iranian port of Chabahar that will provide Afghanistan with access to the high seas, which will be very valuable for Afghanistan, as a landlocked country, and the whole region.

Iran and Afghanistan are also committed to increase their connectivity with emphasis on the Khaf-Herat Railway, the 78 mile-railroad project in Farah and the second bridge over the Hirmand River. A planned trilateral Afghanistan-Iran-India transit corridor is also underway.

Narcotics are a real threat for this region and beyond, and should be addressed by the international community in a very serious and comprehensive manner. Any increase in narcotics is a reflection of the prevailing insecurity and poverty. Strong support and commitment from international donors, Afghan authorities and the United Nations Office on Drugs and Crime (UNODC) is essential to deter the menace of narcotics as a social health challenge and more importantly, a major source of income for extremist and terrorist groups.

On the refugee issue, Iran continues to participate in the work of the Tripartite Commission in order to plan for voluntary, safe, dignified and gradual repatriation of Afghan refugees. It is very unfortunate to learn from the SG’s Report that the year 2016 represents the lowest recorded returnee rate since the establishment of the voluntary return program in 2002, with many of the returnees choosing not to return to their areas of origin, including many who settled in urban centres. We welcome any effort to help overcome the main reintegration challenges faced by returnees and to formulate a Comprehensive Voluntary Repatriation and Reintegration Strategy.

Success in voluntary repatriation first and foremost depends on addressing the reasonable needs of repatriated refugees in Afghanistan, which underscores the necessity of mobilizing more international support for this purpose.

Over the past few decades, we have and continue to support millions of Afghan refugees, who have not been confined to camps and have had free access to Iran’s job market, despite the difficulties that the country has faced. This year, 386,000 Afghan students are enrolled in our schools and universities, which represents an increase of 36,000 due to the Government’s decision to enrol all children, regardless of their legal status. In the field of healthcare and medical services, the Afghan refugees continue to have access to public health services in the country.

We support UNAMA, as well as UN agencies, in their efforts to provide development and reconstruction assistance to Afghanistan through a genuine commitment by the United Nations to a sustained partnership with Afghanistan, as set forth in Final Report of the Tripartite Review Commission on the United Nations in Afghanistan. We need to utilize the UNAMA mandate and its good offices for strengthening national institutions and capacities in priority areas requested by the Government.