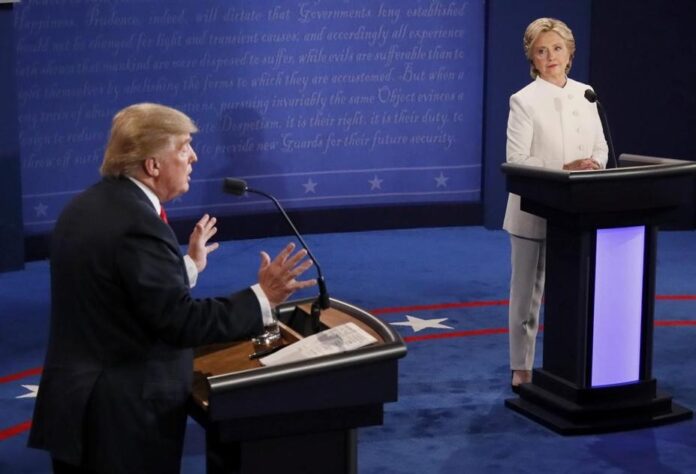 The last US presidential debate between Hillary Clinton and Donald Trump was aired by the IRIB in three languages for Persian, English, and Arab-speaking audiences.

The US Republican and Democratic nominees, Donald Trump and Hillary Clinton, faced off in the last one-on-one debate in the run-up to the US 2016 election.

Given the great interest Iranians across the world have shown in the US presidential polls, the Islamic Republic of Iran Broadcasting (IRIB) decided to air the last presidential debate live in Persian through IRINN Channel.

It also broadcasted it in English through Press TV and in Arabic through Al Alam News Network.

The third presidential debate was held at the Thomas & Mack Center of the University of Nevada in Las Vegas on Wednesday.

Trump looked more restrained and disciplined as the debate started unlike previous encounters, trying not to interrupt Clinton and maintain his composure.

The two candidates focused on fundamental differences between the two parties, namely gun rights, abortion and immigration, rather than their policies.

Immigration was one of the nascent issues at the debate, with Clinton accusing the New York businessman of exploiting undocumented immigrants during the construction of the Trump Tower in New York.

Trump stressed on his proposal for building a wall on the Mexican border, asserting Hillary also sought that once.

The billionaire also accused the Democratic administration of President Barack Obama of deporting “millions” of people.

Trump said he would also deport “some bad, bad people in this country,” referring to asylum seekers, as reported by Press TV.

Clinton referred to leakages of secret documents against her campaign by the WikiLeaks, suggesting the reason for that is that Russian President Vladimir Putin seeks a “puppet” US president.

She cited 17 military and civilian spy agencies that have corroborated that WikiLeaks is all about interfering in the American election process, referring to Trump’s previous attempts to “encourage” Russian espionage.

Trump acknowledged that the Russian president had said “nice things” about him, but asserted: “I don’t know Putin.”

In response to the moderator’s questions about “rigged” election claims in the US, Trump refused to say that he would welcome the outcome of the November 8 vote, instead opting for keeping the voters “in suspense” until he can take a “look” at the results.

Clinton also commented on that, citing recent remarks by Obama, arguing that the real estate mogul should stop “whining” before the 2016 “game” is even over.

She suggested that his claims about rigging the election are made because Trump is getting closer to a defeat on Election Day.

In regard to the Iraqi government’s push to liberate Mosul, Trump pointed the finger at Clinton over the fall of the city to ISIS.

“About three months ago, I started reading that they want to get the leaders and they’re going to attack Mosul. Whatever happened to the element of surprise, OK? We announce we’re going after Mosul. I have been reading about going after Mosul now for about — how long is it, Hillary, three months? These people have all left. They’ve all left,” he said.

“The element of surprise. Douglas MacArthur, George Patton spinning in their graves when they see the stupidity of our country,” he added.

He said that neighboring Iran is “taking over Iraq” and has “outsmarted” American authorities, also blasting Iran’s nuclear deal with world powers, including the US.

Clinton asserted, on the other hand, that she did not agree with the presence of more American troops in Iraq as an “occupying power.”

About the situation in Syria, Trump also made similar remarks, saying, President Bashar al-Assad had proven “tougher” than Hillary and fellow Democrats thought.

After the debate, the Clinton and Trump staff rushed to various media outlets, trying to make the case in favor of their own candidate to portray them as the victor.