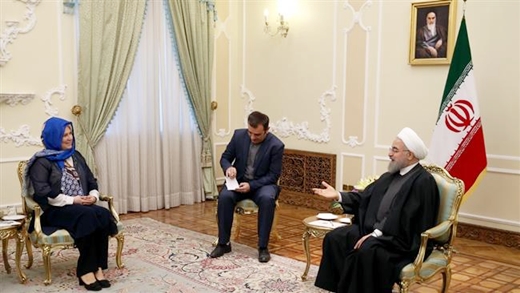 Iranian President Hassan Rouhani has renewed a call for taking collective measures to tackle terrorist groups, saying lack of a serious fight against terrorism will lead to its spillover into other regions including Europe.

“The Islamic Republic of Iran is concerned about instability [caused by terrorists] in some countries from North Africa to a number of countries in the Middle East,” Rouhani said in a meeting with the visiting Estonian Foreign Minister Marina Kaljurand in Tehran on Sunday.

He added that efforts to establish stability and security in these countries can help improve stability in the entire region and across the world.

“The expansion of all-out cooperation between Iran and the European Union has special importance in settling complicated regional and international disputes,” the president said.

The Estonian foreign minister, for her part, said Iran plays a leading regional and international role and expressed her country’s willingness to expand relations with the Islamic Republic in different sectors.

She added that Tehran and Tallinn are faced with new opportunities to strengthen cooperation in a bid to serve the two nations’ interests.

Heading a high-ranking politico-economic delegation, Kaljurand is in Tehran on a two-day visit to hold talks with Iranian officials about ways to expand mutual ties and the latest regional and international developments. Earlier on Sunday, she held talks and attended a joint press conference with Iranian Foreign Minister Mohammad Javad Zarif.