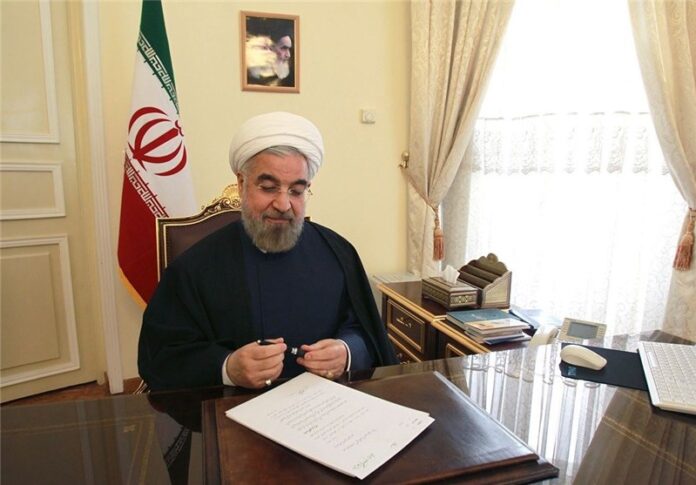 Iranian President Hassan Rouhani in a letter to Supreme Leader of the Islamic Revolution provided details on the recent implementation of the nuclear deal between Tehran and world powers, and briefed Ayatollah Seyed Ali Khamenei on the nuclear achievements.

In the letter which was written on Saturday and published on Monday, Rouhani pointed to 12 years of resistance the Iranian nation showed to threats and sanctions, and underlined 11 achievements of this resistance.

Recognition of Iran’s rights to have peaceful nuclear activities, continuation of the country’s enrichment program in a more developed way, and considerable increase of Iran’s strategic uranium stockpile are among the achievements mentioned by Rouhani.

He also explained that Iran will henceforth become one of the few countries that exports such sensitive materials as enriched uranium and heavy water.

Among the economic, political, and legal achievements of the nuclear deal mentioned by the president are the termination of six anti-Iran United Nations Security Council (UNSC) Resolutions as well as twelve resolutions and five decisions by the International Atomic Energy Agency (IAEA) Board of Governors.

Termination of economic and financial sanctions imposed on the country by the UNSC, the European Union, and the United States were also removed, Rouhani said in the letter, adding that the grounds are now prepared for Iran’s powerful presence in global economy.

Most importantly, the Iranian president added, years of efforts by the enemies of Iran and Islam to portray a scary image of the Islamic Revolution failed, and Iran’s humane and peace-seeking image sparkled throughout the world.

President Rouhani further congratulated the Leader on the “great success”, and appreciated Ayatollah Khamenei’s leadership and guidance throughout the negotiations.

This victory was the result of the Iranian nation’s resistance to all pressures and deficiencies as well as thirty months of long and breathtaking negotiations, he added.

The settlement of the country’s nuclear issue, and the successful interaction with six world powers, consolidated Iran’s regional and international might, President Rouhani added.

He finally reaffirmed his administration’s resolve to tap into the opportunity and use the removal of sanctions to pave the way for Iran’s economic prosperity through serious and effective implementation of “Resistance Economy” policies.

The letter came after Iranian Foreign Minister Mohammad Javad Zarif and European Union’s Foreign Policy Chief Federica Mogherini on late Saturday announced in a joint statement that the implementation of the nuclear deal finalized by Tehran and world powers back in July 2015 has officially been started.

With the implementation of the agreement reached between Iran and the Group 5+1 (Russia, China, the US, Britain, France and Germany), all nuclear-related sanctions against the Islamic Republic were terminated.