Iran’s policies in sharp contrast with those of US: Leader 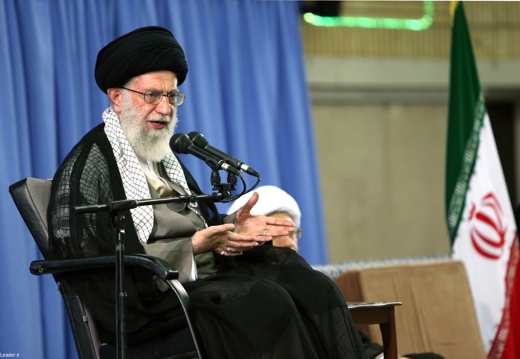 Supreme Leader of the Islamic Revolution Ayatollah Seyed Ali Khamenei on Saturday said that Iran's regional policies are in sharp contrast with those of the arrogant powers, the US in particular.

Ayatollah Khamenei was speaking during a meeting with a number of Iranian officials, Tehran-based Islamic ambassadors and Iranian people from all walks of life on the auspicious occasion of Eid-ul-Fitr, the first day after the fasting month of Ramadan.

Referring to the developments in Iraq, the Supreme Leader said that the policies of the hegemonistic powers in Iraq are toppling a democratically-elected government, pitting Shia and Sunni Muslims against each other and finally dividing the country, while Iran’s policy on Iraq is supporting the country’s democratically-elected government, resistance against factors contributing to the country’s civil war and guaranteeing Iraq’s territorial integrity.

On the difference between Iran’s policy towards Syria and that of the hegemonistic powers, Ayatollah Khamenei said that the arrogant powers are seeking to impose their will on the Syrian nation and overthrow a government that has firmly stood against the Zionist regime, while the Islamic Republic of Iran considers as an opportunity the government, whose platform, objective and plan is resistance against Zionists.

Ayatollah Khamenei underlined that as for regional issues, including those in Iraq, Syria, Yemen, Lebanon and Bahrain, Iran is not seeking its own interests.

The Supreme Leader also said that Iran’s policies towards Lebanon are completely different with those of the arrogant powers.

Ayatollah Khamenei said that the US-led arrogant powers had long kept silent coupld with satisfaction towards occupation of parts of Lebanon by the Zionist regime, but as soon as a faithful and dedicated group, which is one of the most dignified national defense groups across the world, stood against the Zionists and forced them out of Lebanon, they called this group a terrorist group and are seeking to destroy it.

Ayatollah Khamenei said that the Americans call Lebanon’s Resistance ‘terrorist’ and say that Iran is a supporter of terrorism for its support for Lebanon’s Hezbollah, while the real terrorists are the Americans themselves who have created Daesh and back ‘the evil Zionists’ and for that they have to be brought to justice.

The Supreme Leader also touched on what’s going on in Yemen and said in Yemen, the United States is supporting a president who resigned and fled his country under the most critical conditions to cause a political vacuum and demanded another country to attack his people.

The US is shaking hands in friendship with the most dictator regimes that do not even let their nations hear the name of elections, this is while it calls Islamic Republic of Iran, which is tied with elections from top to the bottom, a despotic system, concluded the Supreme Leader.