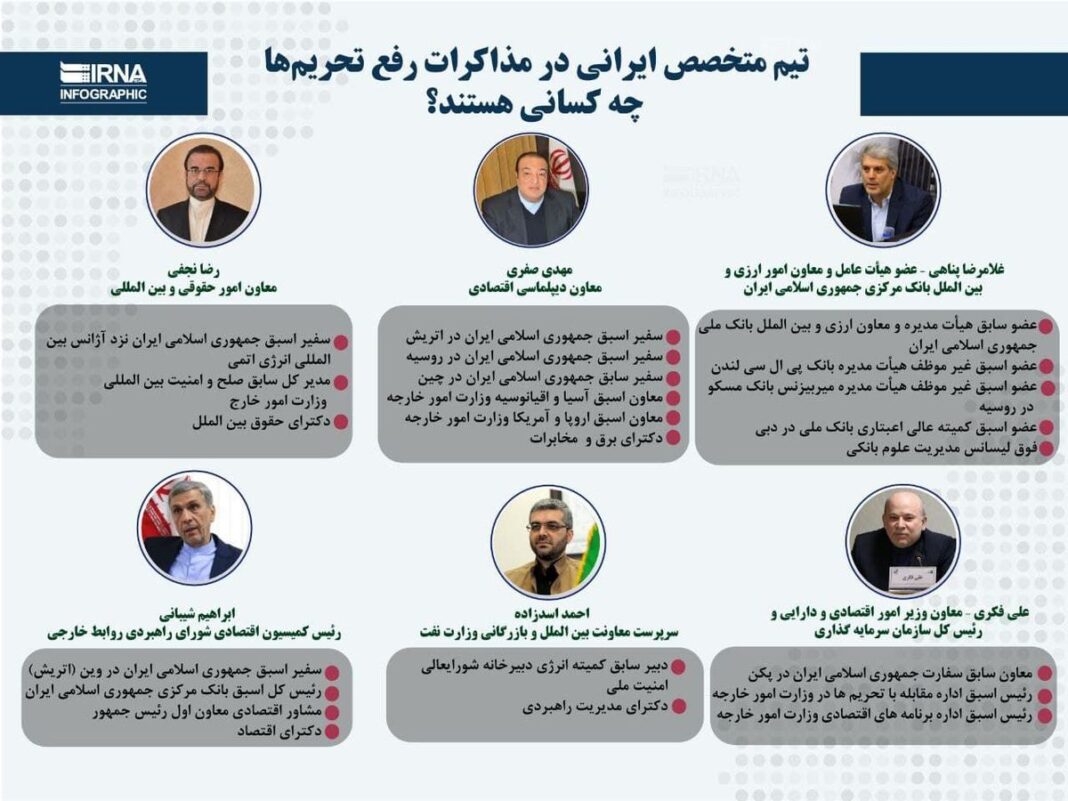 The Iranian negotiating team led by Ali Bagheri Kani is in Vienna where talks are scheduled to be held on November 29, 2021 with the remaining signatories to the 2015 Iran nuclear deal known as the Joint Comprehensive Plan of Action (JCPOA).

The negotiating team is comprised of a host of top experts in various legal, banking and energy sectors hit hard in recent years by the United States’ cruel sanctions.

One of the negotiators is Mehdi Safari, the deputy foreign minister for economic and diplomacy affairs. He used to serve as Iran’s ambassadors to Austria, Russia and China.

Safari holds a Ph.D. degree in Electricity and Communications.

Another member of Iran’s negotiating team is Reza Najafi, the deputy foreign minister for legal and international affairs.

He served as Iran’s ex-ambassador to the International Atomic Energy Agency (IAEA).

He also used to be the director general for international peace and security at the Iranian Ministry of Foreign Affairs, holding a Ph.D. degree in International Law.

Ebrahim Sheibani, the chairman of the Economic Commission of the Strategic Foreign Relations Council, is also part of Iran’s team of negotiators.

He used to serve as Iran’s ambassador to Vienna, the Austrian capital.

He has a Ph.D. degree in Economics and has served as Governor of the Central Bank of Iran as well as the economic advisor to the first vice president.

Another negotiator is Ali Fekri, the deputy minister of finance and economy as well as the director general of the Investment Organization.

Iran’s negotiating team also boasts Ahmad Asadzadeh, the acting head of the International and Trade Department of the Oil Ministry.

He holds a doctorate degree in Strategic Management and served as former secretary of the Energy Committee of the Secretariat of the Supreme National Security Council.

And the last but not least is Gholamreza Panahi, a member of the Executive Board of the Central Bank of Iran and the bank’s deputy governor for forex and international affairs.

He used to sit on the Board of Directors of Iran’s Melli Bank and serve as the bank’s deputy chief for forex and international affairs.

A glance at the line-up of Iran’s new negotiating team in Vienna led by Deputy Foreign Minister Ali Bagheri shows the 13th Iranian administration’s strategy for taking part in the talks and achieving the final goal, i.e., the lifting of cruel and illegal sanctions against Iran, has changed considerably compared to the past.

Given the line-up, particularly the presence of economic experts on the team and their impressive track record in the domains of international economy, one can realize that Iran is set to achieve a precise and comprehensive political-economic agreement.