Iran’s National Orchestra back on stage 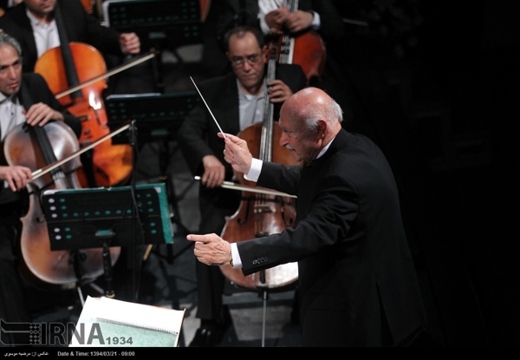 Iran's National Orchestra, led by Farhad Fakhreddini, has resumed its performance after years of absence.

Iran’s National Orchestra, led by Farhad Fakhreddini – a renowned composer and conductor – was back on stage on Wednesday after years of absence from musical events in the country.

In a ceremony held at Tehran’s Vahdat Hall, the Orchestra performed a concert conducted by its founder Fakhreddini, with Mohammad Motamedi and Salar Aghili as the singers.

On the sidelines, the foreign minister told Tasnim News Agency that he is happy – like other art lovers – that Iran’s National Orchestra has returned to perform [after about a six-year hiatus].

Asked about the arrival of foreign artists in Iran, he said the Foreign Ministry allows them to come to Iran, adding his ministry only decides about issuing visa for them, not the performances they might have in Iran.

The following are pictures the Islamic Republic News Agency released on June 11 of the ceremony and the performance of the orchestra: