Iran’s Jungle of Missiles Ready to Rain Down on Enemies: IRGC Commander 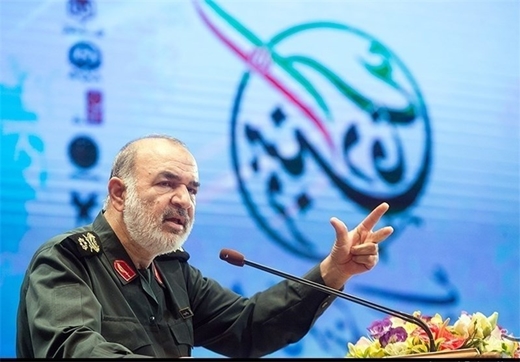 A senior Iranian commander says the country has “a jungle of missiles” deployed at tunnels and silos among other locations, which are ready to be fired at enemies if the need arises.

“We would pursue any enemy seeking to cause the slightest damage to Iran’s self-esteem and independence no matter where in the world they be,” Brigadier General Hossein Salami, the Islamic Revolution Guards Corps (IRGC)’s second-in-command, said in a televise interview on Thursday.

He added that the Islamic Republic has been building and modernizing its military equipment on its own without relying on any country despite the arms and economic embargoes it is facing.

In the area of producing unmanned aerial vehicles (UAVs), Iran now stands on an equal footing with the United States, Russia and China, he said. “Our UAVs can fire rockets at and capture footage from [targets] within a range of 3,000 kilometers,” Salami said.

“Some big powers have even made demands for our products,” the senior military official said.

Touching on Moscow’s sale of the S-300 missile system to Tehran, Salami said the purchase was driven by contractual obligations not domestic needs for such apparatus.

Amid the diplomatic efforts to resolve the Iranian nuclear issue, the Americans were always broaching the military option, Salami said. “They, however, never dared to take any action as they did not feel empowered versus us…They know the consequences of attacking Iran will be dire.”

Americans are bereft of political logic, he said, adding that all they understand is the logic of power.

Addressing Iran’s support for Lebanese and Palestinian resistance groups, the commander asserted that the Lebanese resistance movement of Hezbollah and fellow Palestinian groups are “completely popular and defend their rights.”

“It is not acceptable under any circumstances for them (the West) to ask us to consider them to be terrorists,” the commander said.