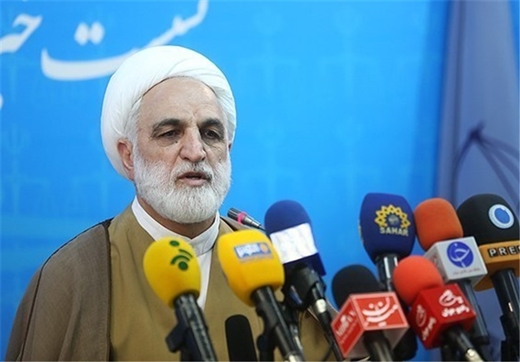 Nothing has been raised about the exchange of Jason Rezaian for Iranian nationals jailed in the US, Mohseni Ejei said.

Iranian Judiciary Spokesman Gholam Hossein Mohseni Ejei said there have been no talks on an exchange of a Washington Post reporter detained in Iran.

“Nothing has been raised about the issue yet,” Mohseni Ejei said, in reply to a question on recent speculations about the exchange of Jason Rezaian, The Washington Post reporter imprisoned in Iran on espionage charges.

The remarks came a couple of days after Parliament Speaker Ali Larijani raised the possibility of a prisoner swap with the US, when asked about the release of Rezaian.

In August, Iranian Deputy Foreign Minister for Consular, Parliamentary and Expatriates’ Affairs Hassan Ghashghavi rejected media reports that there are plans to exchange the jailed reporter for Iranian prisoners in the US.

“There are no talks on the swap of Jason Rezaian (for Iranian nationals jailed in the US),” Ghashghavi said.

Rezaian, a 39-year-old correspondent with dual Iran-US citizenships, along with his wife, Yeganeh Salehi, was arrested in Tehran on July 22, 2014 on espionage charges.

Two other American citizens also detained along with them work as freelance photojournalists. Yeganeh Salehi was released on bail in October 2014.

An indictment issued by Tehran’s prosecutor general says Rezaian is charged with “espionage by collecting the country’s decisions on internal and foreign policy issues, and cooperation with hostile governments.”