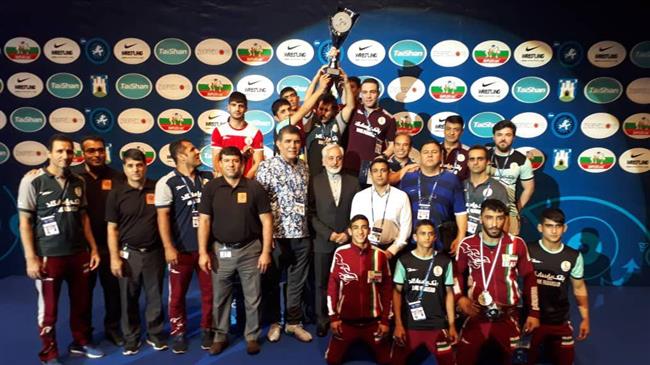 The national Iranian cadet Greco-Roman wrestling team has put in impressive displays of grappling skills at the 2018 Cadet Wrestling World Championships in Croatia, and been crowned as the champion of the prestigious international sports event after more than two decades.

The young Iranian sportsmen tallied 130 points to be awarded the top team prize of the tournament in the Croatian capital city of Zagreb on Sunday night. They had snatched two gold, two silver and two bronze medals.

They were followed by representatives from Russia, who notched up 108 points to claim the second spot.

Wrestlers from Turkey and Georgia sat in the third and fourth places with 91 and 89 points respectively.

Amirhossein Khounsari claimed the gold medal in the 55-kilogram class after defeating Giorgi Pertaia from Georgia.

Sajjad Javid Abbaspourragani also collected a silver medal for the Islamic Republic of Iran after failing to defeat Uzbek wrestler Abror Atabaev in the final competition of the 48-kilogram weight division.

In the 60-kilogram weight class, Iran’s Shahin Eidi Badaghi Mofrad failed to prevail over Serhat Kirik from Turkey and claimed a silver medal.

Iran’s Mohammad Aziz Naghousi also got a bronze medal in the 80-kilogram section.

The 2018 Cadet Wrestling World Championships started on July 2, and concluded on July 8, 2018.

Rouhani, in a message released on Monday, felicitated the Iranian nation on the triumph, and praised the efforts made by the young Iranian weightlifters and their coaches to win the championship.